• As I realized last week, what makes big meals (we had 16 people) scary isn’t the cooking as much as the sheer volume of it all and the logistics required to manage them. I mean, who here has a kitchen that was built to feed 16? Trust me, it’s not you, it’s your kitchen making things hard.
• Thus the more time you spend plotting things out, the less stressful it will be. Because I’m Team Casserole, i.e. I prefer dishes that are deep and bubbly, can be made well in advance and reheat well, they’re all fairly forgiving of too long or short warming times. Too long, they get a little extra crunchy and toasted on top (yum), too little, they still pack a lot of warmth inside, even if they’re not bubbling hot. I warmed all of the dishes before the turkey went in and then slid in one or two while it roasted. When the turkey came out and we needed 30 minutes to rest and carve it, all the sides went back in to warm.
• Everything that can be done in advance, should be, and as early as possible. You’re doing it for you. When we have a lot of people over, this often leads to me quite over-exhausting myself the night before getting everything prepped that can be, but then I wake up rested and we’re 80% there. It’s not actually a stressful day, which means we’re far more likely to enjoy the party. If I can’t finish prep the night before, I’ll do it in the morning. It’s essential to me that there’s a little window of vegging/non-cooking time between prepping stuff and cooking the stuff that must be done at the last-minute. It’s also a great time to change into something fresh.
• All the pies were made earlier in the week and either went into the fridge (pecan) or freezer (pumpkin) until needed.
• Finally, I think we should all buy each other trivets for Christmukkah. I have… 4? What kind of Thanksgiving has only 4 hot dishes coming out of the kitchen? None we want to be at, thank you very much. 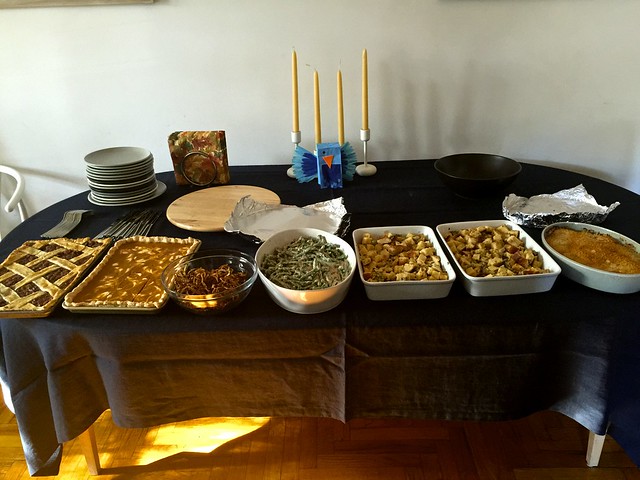 About That Turkey
• Turkeys are amusingly hard to find a week before Thanksgiving.
• Brining is a delicious nightmare. I know a lot of people don’t do it. I know you don’t need to. I know there are less-insane options, like dry-brining. But I am really not hugely into turkey to begin with because I always find it dry and often flavorless. And I don’t want a little overcooking to ruin it. Thus: brining. Oh, but what a comedy it was and by comedy, I mean cry-laugh emoji. It involved a 19.5-pound bird, 1 of these bags and 2.5 gallons of brine, which turned out to create a forceful enough pressure on the bag to pop it open. Mopping was involved. Then I got it into the fridge (40 pounds, no easy feat and yet somehow still easier than that time I had to carry my 20-pounder out of the grocery store sideways with an arced back… life math be crazy) and discovered that the bottom had a tiny hole in it and I don’t know if normal people whose mothers were not microbiologists list salmonella among their greatest fears, but raw turkey juice everywhere in the fridge dripping into the produce drawers required a hazmat-suit level of cleaning until I could stop worrying.
• Where’s the recipe, Deb? We were so happy with the turkey but I cannot in good conscience share with you a recipe for something so epic that I’ve only made once. I mean, what if I missed something major and ruin all of your holidays? So, I promise, it’s coming and it’s going to be worth the wait. 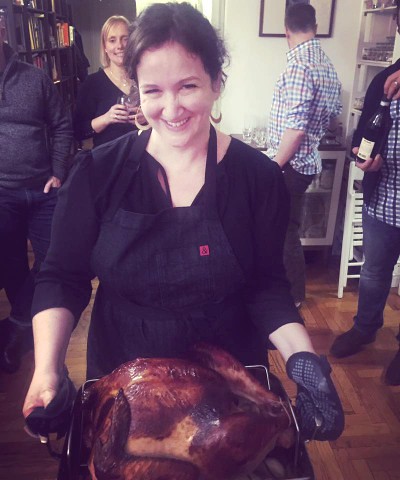 • Ina Garten’s Baked Fontina (I hope to share a more budgeted version of this soon)
• Corn Muffins (brought by a friend)
• A Giant Kale Caesar made with a riff on this dressing. I’d intended to make this salad, however.
• A Roast Turkey Mash-Up That Was About 50% Thomas Keller, 30% Gourmet and 20% Alton Brown
• Cathy Barrow’s Challah Stuffing With Mushroom and Celery with homemade challah, because crazy things happen in my freezer
• Green Bean Casserole with Crispy Onions (doubled)
• Roasted Delicata Squash with Brown Butter, Lime and Pepitas, except I ran out of time so they were just roasted
• Root Vegetable Gratin
• Baked Beans (brought by a friend)
• Ree Drummond’s Twice-Baked Potato Casserole (brought by a friend)
• Cranberry Sauce (brought by a friend, the one who taught me to make my own back in the day)
• Cheesecake-Marbled Pumpkin Slab Pie
• A Very Large Pecan Pie
• By the way, we made everything above except the gravy and obviously the turkey vegetarian simply by using vegetable stock; it wasn’t a challenge and nobody missed out on a thing. For the twice-baked potatoes, an area was left bacon-free on top. 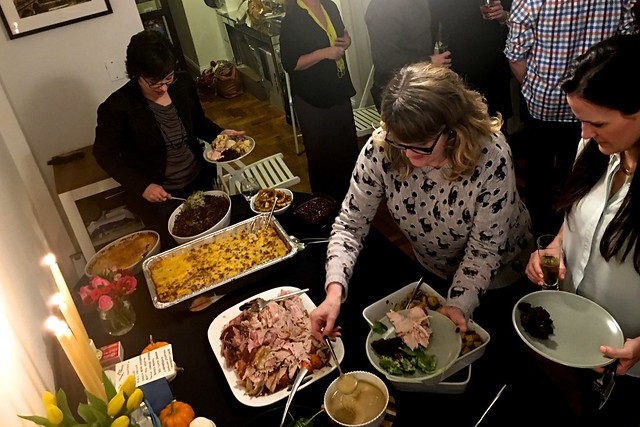 • Do not underestimate the power of one really great, crunchy salad, the perfect contrast to all the butter-drenched and gluten-full wonders across the table. It goes quickly. I’m sharing today the salad I’d intended to make; I think it’s the perfect last-minute addition to any menu and so easy to bring with you from home. I guarantee the host will appreciate it. 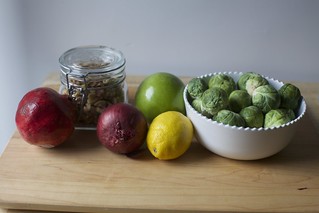 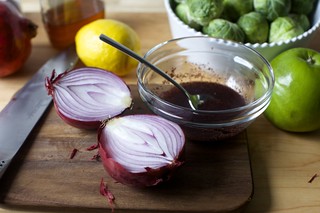 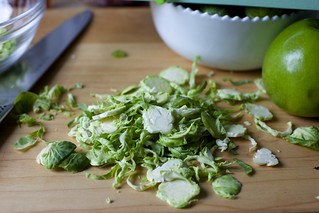 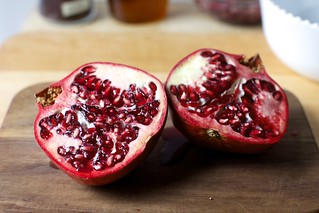 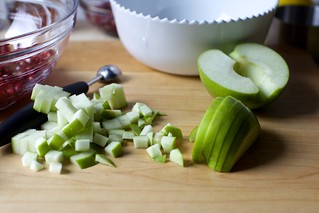 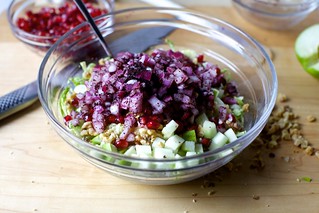 • Finally, ask me anything! I feel like I know 100x as much about Thanksgiving as I did 72 hours ago and most of what I did is very fresh in my head. I’m happy to answer any questions you have in the comments below. I’ll probably attack them mostly this evening, so don’t fret if you don’t get an immediate response.

And for the other side of the world:
Six Months Ago: Roasted Carrots with Avocado and Yogurt and Almond Rhubarb Picnic Bars
1.5 Years Ago: Fake Shack Burger and Swirled Berry Yogurt Popsicles
2.5 Years Ago: Soft Pretzel Buns and Knots
3.5 Years Ago: Greek Salad with Lemon and Oregano
4.5 Years Ago: Vidalia Onion Soup with Wild Rice

This is a crunchy, bright abundantly November-ish salad that hails from Michael Solomonov’s Zahav cookbook. In the book, he calls it tabbouleh and explains that while in the U.S., tabbouleh is usually made with bulgur wheat, parsley and chopped tomatoes, in Israel, you’re unlikely to find it made the same way twice, and I’d say the same for Solomonov’s versions too. In the book, he’s swapped kale for parsley but I’ve also seen him do the same with shredded brussels. He says he enjoys swapping quinoa for the bulgur, and adding pomegranate when it is in season. In the fall, he said he enjoys adding apples and walnuts, and will sometimes even replace the grain entirely with walnuts. And it from here that we’ve ended up with a dish I won’t even call tabbouleh, so not to confuse anyone, but a salad, and an excellent one at that. Between his book and the various outlets that have published versions of this salad, I found almost no two recipes alike so I instead set out all the ingredients and added them at the levels I liked most. You, too, can and should adjust the flavors to taste.
Make the sumac-pickled onions: Combine red onion, wine vinegar, sumac and 1/4 teaspoon kosher salt in a small dish and set aside while you prepare the other ingredients, or ideally at least 15 minutes.

Combine all salad ingredients, including red onions and their pickling liquid, in a medium bowl and season to taste with salt and red pepper. Taste and adjust ingredients as desired — I’ve seen versions of the recipe with more honey, olive oil and lemon; I didn’t need them but you might find you do.

This salad can be prepped ahead, but I’d keep the dressing off of it until at most an hour before serving so it doesn’t discolor the sprouts.