One of my worst cooking traits is that when I get frustrated with a recipe, it can take me years to get back to it. I mean, I’m theoretically too old to be having tantrums, kitchen or other, but there’s no other way to describe this behavior where I get frustrated, throw my jangly measuring spoons in the sink and huff off to gaze at jeans I could probably fit half a thigh into, which is how I mope.* Sure, you could just say that I need a little space, a break, it’s-not-you-it’s-me from the recipe so I can gain some perspective, and consider other approaches but six years? That is how long it’s been since I last attempted to share a recipe for old-school, dead-simple butterscotch pudding from scratch which refused to set. A six-year tantrum. (Fine, I snuck some pudding pops in there, but it’s so cold today, I cannot even look at them.) 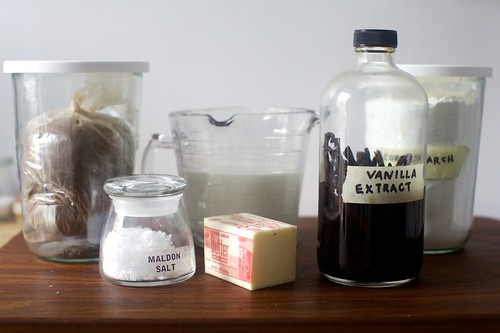 There’s a reason butterscotch pudding is a classic, and no, and I don’t mean custard or pastry cream with 6 egg yolks and over a quarter-pound of butter. I don’t mean mousse, with all of those egg yolks, twice the butter and also egg whites and heavy cream. I don’t mean budinos, flan or any of the other luxurious jiggly desserts we order in restaurants. I mean, butterscotch pudding, the kind a grandmother would make with just milk and a little thickener, like the kind that comes in a box but will never, ever taste as good as this. 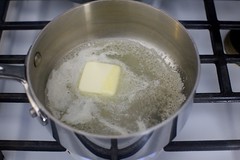 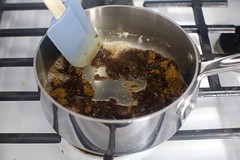 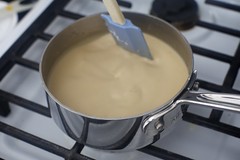 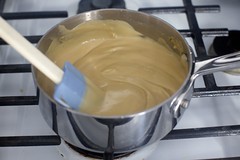 I know food writer types are always trying to tell you how “easy” and “quick” things are to make — we’re always trying to get you out of the kitchen, aren’t we? — but butterscotch, the buttery brown sugar, vanilla and sea salted counterpart to white sugar caramel, really, truly is. Melt some butter, add brown sugar and let it bubble a little, salt and then cream, finish with vanilla and you’ve got a dessert sauce from the gods. Stovetop butterscotch pudding uses this same process, adds a little thickener and then milk instead of cream, although you can use some of both if you’re a resolution-snubber. It sets in cups in the fridge, looking rather beige and suspect. But you don’t eat it for its looks. You eat it because there is more dynamic flavor compressed into single spoonful than you’re going to get from even the best scoop of ice cream. It’s rich and toasty, faintly buttery, comforting and unlike most butterscotch desserts, not tooth-achingly sweet. It’s something of a midwinter miracle. 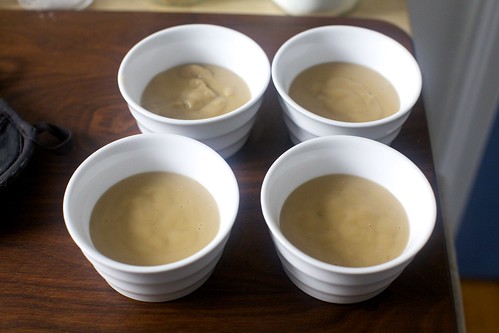 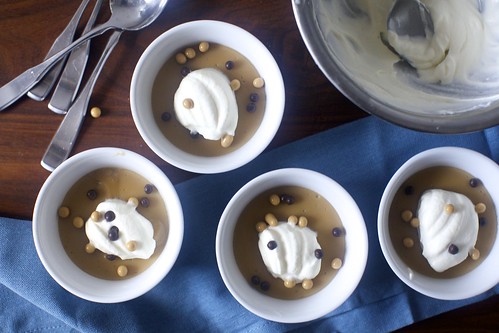 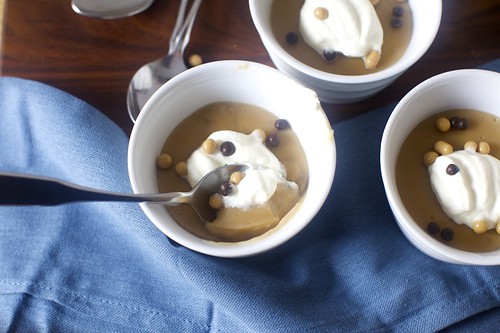 * I could probably learn some coping skills from this guy.

But where’s the scotch? Would you believe that butterscotch, in the classic confectionary sense, doesn’t have scotch in it? I mean, I’m not saying butterscotch sauce and scotch (or rum, or bourbon) would taste bad together, but the name is misleading. Wikipedia says that the origin might be “scorch” (for heat) or “scotched” cut into squares, like the candy) instead.

And for the other side of the world:
Six Months Ago: Sticky Sesame Chicken Wings
1.5 Years Ago: Slow-and-Low Dry Rub Oven Chicken
2.5 Years Ago: Blackberry Gin Fizz
3.5 Years Ago: Flatbreads with Honey, Thyme and Sea Salt

Butterscotch Pudding
You can make this pudding even more rich by swapping 1/2 cup of the milk with heavy cream. Read to the end for a dairy-free coconut version.

Cook time: 10 minutes plus 1 to 2 hours to set in the fridge
Yield: 6 1/2-cup servings or 8 petite ones (I love these glasses for tiny hands and also puddings). The photos here show a half-batch of pudding.

In a medium saucepan over medium heat, melt the butter. Add the brown sugar and reduce heat to medium-low. Let it heat and bubble for 1 to 2 minutes, stirring frequently. Don’t let it smoke or burn, which brown sugar is always very eager to do. Reduce heat to low. Add salt and cornstarch, stirring until combined — it’s going to look like a thick paste. Switch to a whisk and add the milk in a thin drizzle, whisking the whole time, so that no lumps firm. Once all of the milk is added, you can switch back to a spoon. Cook over low to medium-low, stirring frequently, until the mixture comes to a gentle simmer. Let it simmer for a full minute, stirring, it should clearly thicken at this stage, although it will finish thickening in the fridge. Off the heat, stir in the vanilla extract. Divide into glasses or pudding cups and let chill in fridge for 1 to 2 hours, until set.

Those decorations on top: A dollop of whipped cream and chocolate crunchy pearls. I highly recommend the dark chocolate ones (you can get them from Callebaut, Valrhona and a few other brands); they’re so much more delicious and fun to eat than chocolate sprinkles. I highly recommend that whatever you do, you never try the beige ones, which are made from Valrhona’s Dulcey Chocolate, their in-house take on salted, caramelized white chocolate. I regret ever discovering it. Trust me, the safest thing is to never find out how good it is.

Variation: Coconut Butterscotch Pudding: Okay, I realize that making butterscotch without butter is of questionable logic. But, I did it anyway, using coconut oil instead of butter, and canned full-fat (and well-shaken) coconut milk for the milk above, yielded a totally dairy-free pudding. The result is something distinctly delicious, a little darker and more translucent in color than the dairy version, with a nuttier butterscotch flavor. Don’t skimp on the salt here.