American breakfasts are predominantly sweet: yogurts with fruit sauces and overnight oats with more fruit sauces and lattes with caramel syrup and whipped cream and our secret household love, that flaky cereal with the dried strawberries, but most especially the baked goods, muffins and quickbreads and cinnamon buns. I love them all but more Saturdays than not, I wake up craving something savory I can plop a wobbly egg on top of and it’s for this reason that knew the second I saw cornbread waffles in Joy Wilson’s, aka Joy The Baker’s, new brunch cookbook that they’d be the first thing I was going to make. 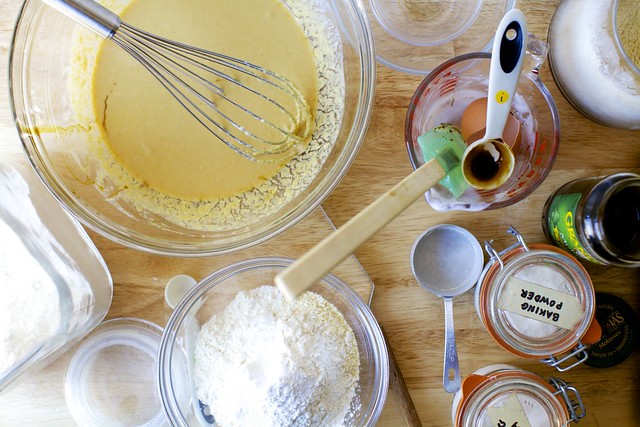 Brunch has become a cultural punching bag over the last several years — “The meal brings out the worst in restaurants and their patrons. ‘Chefs bury the dregs of the week’s dinners under rich sauces, arranging them in curious combinations.’” “Less satisfying than the two things it purports to replace.” — but this, like most food things people like to complain about, are bothersome at restaurants. At home, brunch is everything: loosely scheduled and relaxed, exactly the way weekends should be, and pretty much anything you like to eat can be easily reformatted for a lazy midday meal. 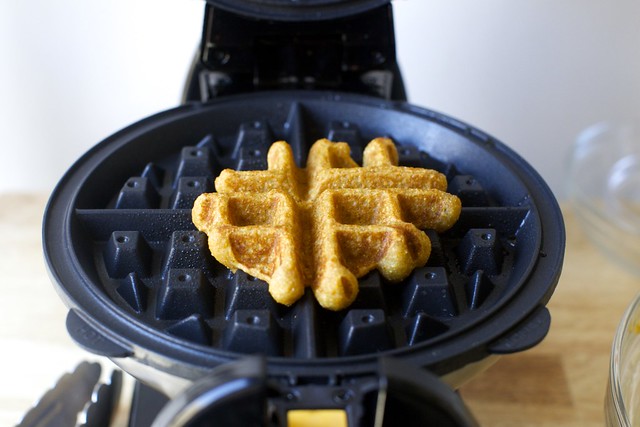 Joy’s book is a ray of sunshine because it gets this — bright cocktails and smoothies, omelet wheels, banana bread granola, gooey buns and praline bacon — but I also love that it’s not entirely predictable, you know, like those derided brunch menus. There’s salad in there, something I wish more brunch menus included as an oasis from all the fried and smothered stuff, and in a nod to her adopted home of New Orleans, a Cajun Soufflé and a Muffaletta Brunch Salad and yes, stunning, pillowy overnight beignets that are going to happen next. 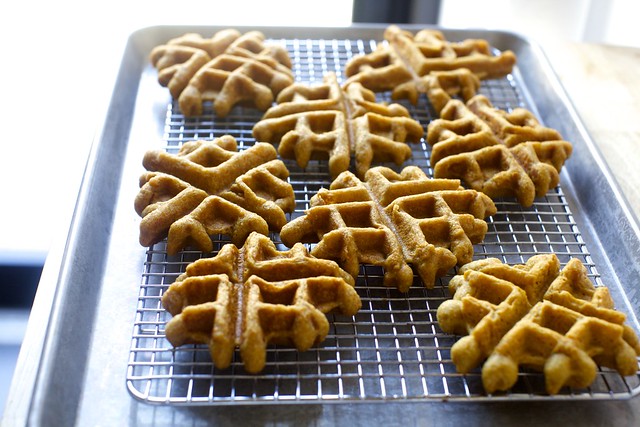 For this weekend though, these cornbread waffles are a no-brainer: they take 5 minutes to assemble, the batter briefly rests while you brew the coffee, and cook just as quickly. They go sweet or savory — finished with bananas and maple syrup or with hot honey and a piece of fried chicken teetering on top; you could add some cheddar, jalapeños and a salsa-topped egg if you’re inviting me over and you never want me to leave or you can do as we did, classic-style with crispy bacon, salt, pepper, chives and a poached egg. 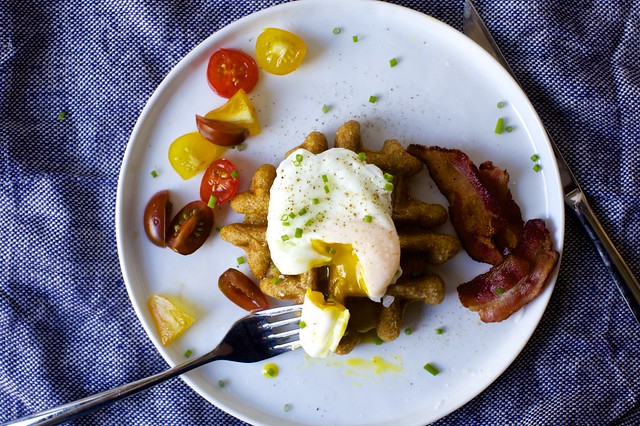 And for the other side of the world:
Six Months Ago: Magic Apple-Plum Cobbler
1.5 Years Ago: Oat and Wheat Sandwich Bread
2.5 Years Ago: Cucumber Lemonade and Sunken Apple and Honey Cake
3.5 Years Ago: Frico Grilled Cheese Sandwiches and Miso Sweet Potato and Broccoli Bowl
4.5 Years Ago: Homemade Wheat Thins

Can you make these as pancakes is something someone usually asks when I share a waffle recipe. I didn’t check this time, however, I can tell you with authority that these are the most excellent cornmeal pancakes in the world, plush and ungritty but still crisp.

I made these in a Belgian-style waffle iron (I’m like a broken record, guys, but I’m still obsessed with this one because removable, dishwasher-safe plates) but I think they’d be just fine in a standard, shallower one.

Joy called for 2 tablespoons honey but I skipped it, wanting fully savory waffles. I did not skip the suggested tablespoon of molasses and hope you do not. It adds the faintest hint of sweetness and a real nuanced flavor.

Combine cornmeal, flour, baking powder, baking soda and salt in the bottom of a medium bowl. In a smaller bowl, whisk molasses, butter, buttermilk and egg until combined. Pour into dry ingredients and stir to combine. Let batter rest for 10 minutes. Use this time to place a oven-safe cooling rack over a tray and heat oven to 200 degrees. Heat waffle iron according to manufacturer’s instructions; I found a medium heat just fine here.

Brush waffle iron with melted butter or coat with nonstick spray. Ladle in waffle batter, 1/4 cup at a time. (It makes 4 or so -inch finished waffles, cute ones made for an egg on top.) Cook until lightly browned and carefully transfer to rack in oven. They’ll crisp as they set. Repeat with remaining batter. You should get 8 waffles out of this, ideal for 2 per person.

Waffles keep well for 4 days in fridge and longer in freezer. Waffles re-crisp and come back to life in a warm oven.