Promise me something: The next time you see baby artichokes, whether in a 9- or 12-pack clamshell of indeterminate origin at your local supermarket or loose at your local farmer’s market (jealous, as ours won’t be here for some time), I want you to buy every single one of them. All of them. This is no time to share with the next customer or to be a good locavore citizen. Trust your local artichoke-obsessed food blogger on this one; without fail, they disappear for the season the moment you discover their awesomeness, which I hope we’re all about to do. 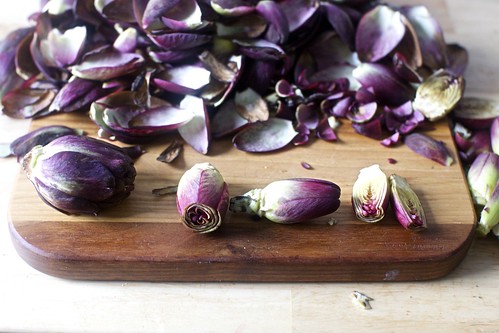 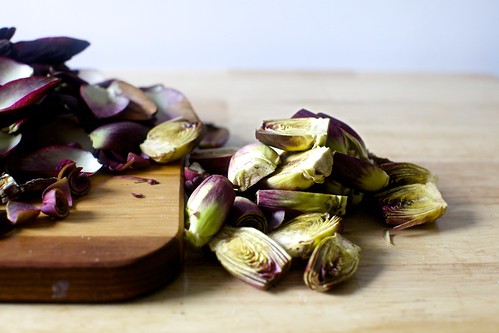 As I admitted recently, despite the fact that they’re my favorite vegetable, we don’t talk much about artichokes around here because I know they’re fussy to deal with, and for most people, this is a dealbreaker. It’s also because my favorite way to eat big artichokes is rather boring — boiled or steamed whole until deathly soft, the leaves pulled and dipped into a hodge-podged sauce of mayo, lemon juice, salt and black pepper. With a glass of white wine and a simple green salad on the side, I honestly don’t know why I eat anything else for dinner, ever. 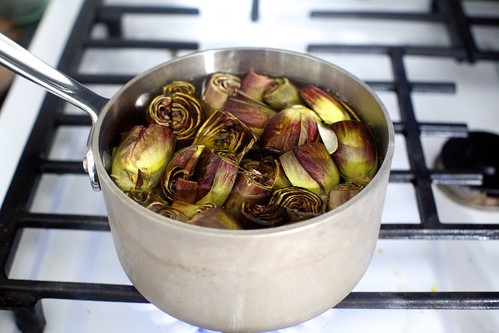 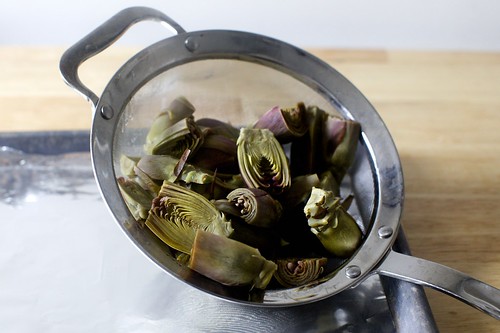 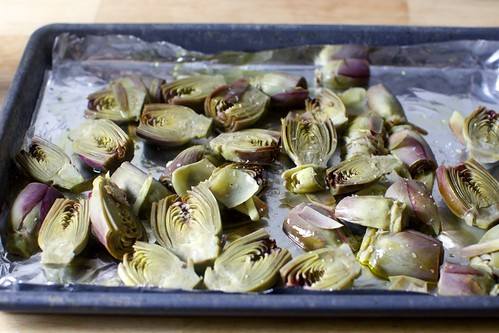 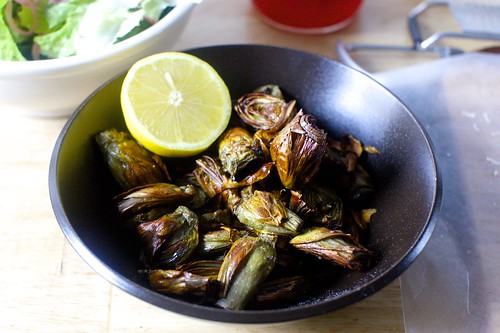 But all of this changed a few summers ago when I discovered the magical, wonderful world of the aforementioned fresh baby artichokes, which I hope you’ll remember we’ve agreed you’ll never pass up at a store again. Baby artichokes are everything that their big counterparts are not — they require minimal prep (you can eat most of the leaves whole and there’s no fibrous choke to remove) and barely any cooking time. I found if I parboiled them for 5 minutes and tossed them into a blazing hot oven or onto an equally singeing grill with olive oil and coarse salt, they emerged crispy, frizzled and showstopping, the leaves golden and layered like baklava and unfathomably delicious. Showered with fresh lemon juice and a handful of chopped parsley (if yours, unlike mine, has yet emerged beyond the microgreen tuft stage), these bite-sized wonders make a gorgeous summer appetizer, should you be nice enough to share with friends, or a dinner worth hoarding. And let’s be honest: I mostly hoard them. 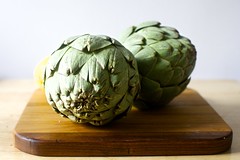 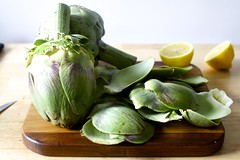 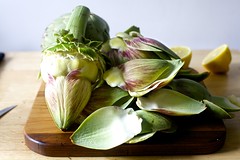 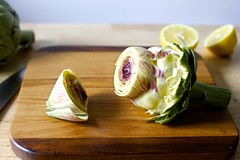 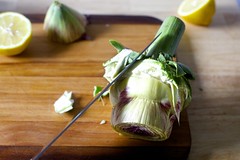 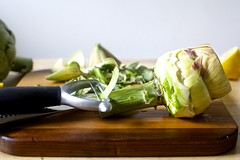 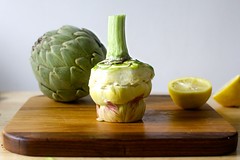 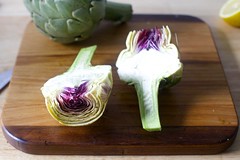 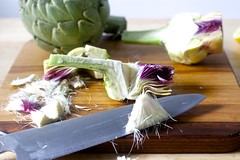 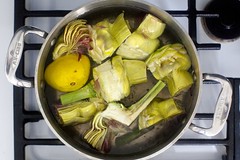 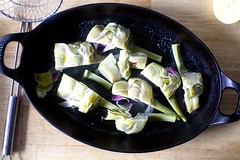 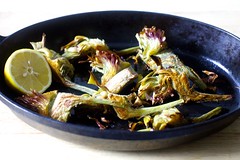 However, as I know large artichokes are often easier to find, in the interest of science I used a similar approach to cook them yesterday. The results are as delicious, but definitely more wasteful as you’ll have to toss much more of them to get to the edible-once-crisped parts. Whichever you can get your hands on this spring and summer, I rarely feel as confident as I do that you could fall as in love with these as we have. And if you don’t, just call me and I’ll be happy to make short work of your leftovers. I promise, having a 34-week preggo show up to inhale your artichokes wouldn’t be awkward at all. 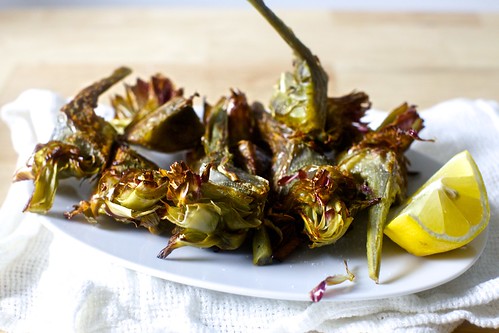 And for the other side of the world:
Six Months Ago: Decadent Hot Chocolate Mix
1.5 Years Ago: Parsley Leaf Potatoes and Sweet Potato Cake with Marshmallow Frosting
2.5 Years Ago: Nutmeg Maple Butter Cookies
3.5 Years Ago: Cauliflower Feta Fritters with Pomegranate

About the lemon: Artichokes love to turn brown the second you cut them. Rubbing the exposed sides or anywhere your knife touched the ‘choke with the cut side of a lemon half prevents this, but it’s honestly impossible to prevent all browning, no matter how careful you are. Here’s the good news: I find it really doesn’t matter. The browning has no effect whatsoever on taste, and also disappears the second the artichokes go into boiling water. So, don’t fret if you can keep up with oxidation process; it will all be the same in the long run.

Baby or large artichokes, as many as you wish to prep and eat
1 to 2 lemons, halved (1 should be fine for smaller amounts)
Olive oil
Coarse salt
Chopped flat-leaf parsley (for garnish, optional)

Prepare artichokes: Snap back toughest and unevenly sized outer leaves, peeling and plucking until you get to the paler yellowish leaves that are all the full length of the artichoke. Be careful of thorns; almost every leaf ends in one. If they’re particularly bothersome, you can lop off the bottom third of the artichoke at this point. (We will otherwise do it next.) For baby artichokes, cut off bottom 1/3 of leaves. For full-sized artichokes, cut off bottom 2/3 of leaves (more than you see in my photos), leaving only the top parts attached to the stem and heart. Rub all cut sides with lemon.

Use a knife to pare down rough spots where leaves met the heart. Use a vegetable peeler to remove the outermost layer of the stem and “neck” of the artichoke. With tiny artichokes, the stems are sometimes too small or in bad shape to be used, in which case, feel free to trim them off. Rub exposed sides with lemon.

Heat oven or grill: Heat oven to 400 degrees, a gas grill to its highest setting or a charcoal grill to a very high temperature.

Par-boil artichokes: Bring a pot of salted water to a boil. Add trimmed artichokes and the halved lemon you’ve been using to prevent browning. Boil them for 5 minutes (for baby artichokes) or 10 to 15 minutes (for full-sized artichokes), until a knife point inserted into the neck of the artichoke pierces easily to the center. Drain artichokes well; discard lemon half.

If grilling artichokes: In a large bowl, toss drained artichokes with a glug or so of olive oil, enough that they all glisten. Season with salt. If the grill grates are close enough together, I use tongs to arrange the artichokes in one layer. If not, you might need to use a vegetable tray to keep the artichokes from falling through. Grill until artichokes are crisp and brown.

To serve: Shower with additional lemon juice (from second half of lemon), any extra salt (if needed) and parsley. Eat soon, or someone else will.