eggplant with yogurt and tomato relish

This is not a recipe for eggplant caviar, but caught up in an adoration of July eggplants too lovely to roast just to grind up, it is loosely inspired by it. If you’re unfamiliar with eggplant caviar, well, you need to come over to my in-law’s where it is never not on the table, or basically anywhere else my mother in-law goes, because she’s not allowed to show up without it. Just to confuse you, there’s also caviar on the table and they have nothing to do with each other, although this is a matter of argument. The Joy of Cooking and others liken eggplant caviar to a “poor man’s caviar,” a tasty substitute for those who could not afford the real stuff, but actual Russians will tell you that caviar was affordable in the Soviet Union and everyone was poor. 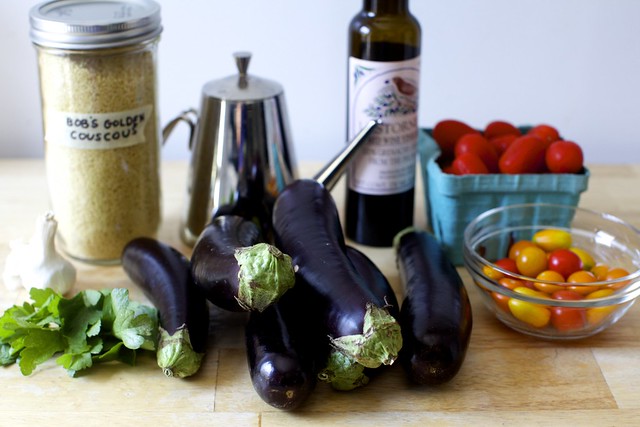 Originally from the Caucasus, versions exist today everywhere from Russia to Greece because it’s delicious although I don’t think you’ll ever find two that are alike. Not for the faint of heart, my mother in-laws version [recipe over here] is aggressively zingy with garlic and vinegar; it should come with a warning, but it’s too much fun to watch newbies arrive at the table and ladle it on, not realizing it was going to taste almost as much like a pickle as it does eggplant. 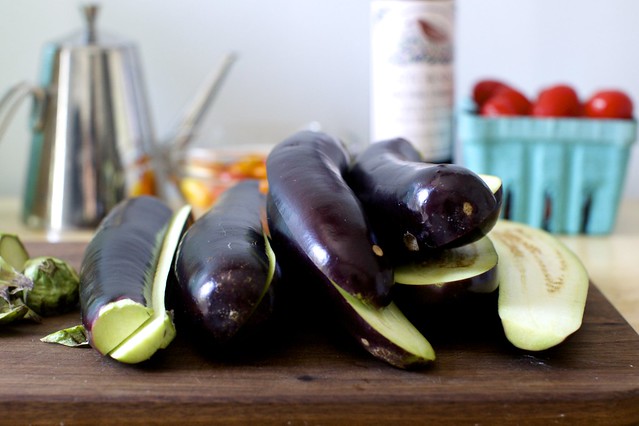 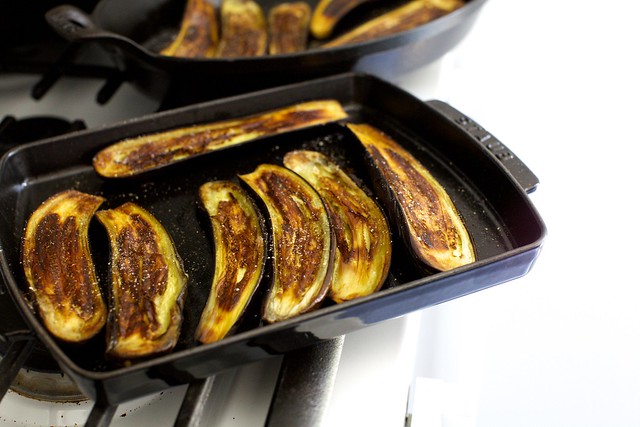 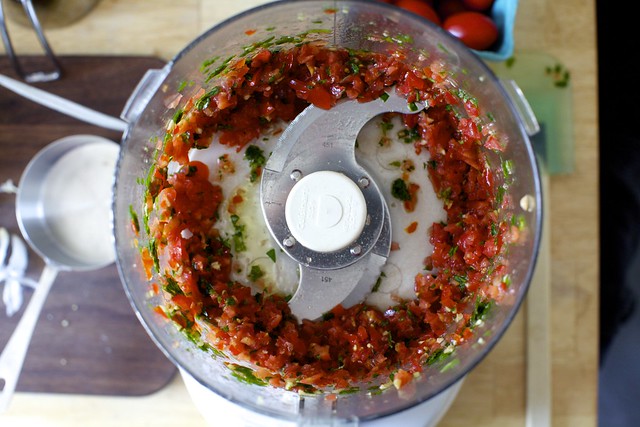 But again, this isn’t eggplant caviar, just a suggestion of it. Instead we’re leaving the roasted or grilled eggplant intact and ladling the other components of the caviar over it, namely garlic and parsley, a piquant tomato relish. A schmear of yogurt underneath provides an enriching buffer zone; a scatter of couscous, if you so desire, makes it a fuller meal. This is one of my favorite kinds of meals, roasted vegetables with “the works” on top. No matter what swaps you make, it’s a great formula for the abundance of roast-able vegetables everywhere right now, so have fun with it. 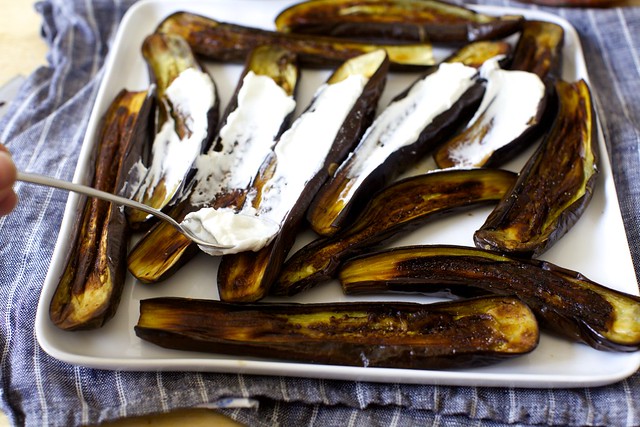 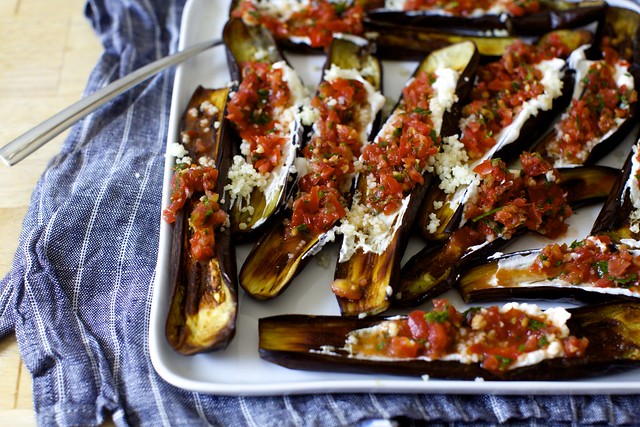 And for the other side of the world:
Six Months Ago: Cabbage and Sausage Casserole
1.5 Years Ago: Fried Egg Salad
2.5 Years Ago: Homemade Dulce De Leche
3.5 Years Ago: Intensely Chocolate Sables
4.5 Years Ago: Potato Chip Cookies

Eggplant with Yogurt and Tomato Relish

Traditional ikri (Russian eggplant caviar) uses red peppers and dill, too, but not the one I know so I skip it too. I made a little plain couscous to sprinkle on this so it felt more hearty; it’s tasty here but completely non-essential. You could also serve this over the couscous, or skip it entirely.

Heat oven to 425 degrees. Trim eggplants and cut in half lengthwise; season cut sides with salt and pepper. Coat a large roasting pan with olive oil (1 to 2 tablespoons). Arrange eggplants cut side down; sprinkle with more salt and pepper. Roast for 25 minutes on the first side, or until brown underneath then flip and roast 5 to 10 minutes more. Remove from oven and let cool slightly.

Meanwhile, make couscous, if using it. Bring 3/4 cup water and a few pinches of salt to a simmer then pour it over dried couscous in a bowl. Cover with a lid or foil and let side for 5 minutes to absorb, then fluff with a fork.

Make tomato relish by pulsing garlic and parsley in a blender or food processor until finely chopped, then add tomatoes and pulse until they’re well chopped. Add 1 tablespoon olive oil, vinegar, salt, freshly ground black pepper or a pinch or two of red pepper flakes and pulse to combine. No food process or blender? Not a problem at all; just mince the garlic and parsley well and finely chop the tomatoes; stir this together with the remaining ingredients. Both methods: taste for seasoning. We like this extra sharp and almost always add 1 more teaspoon vinegar and more salt. The longer it sits, the more potent it gets.

To assemble, schmear each eggplant half with a little yogurt. If you’re using couscous, sprinkle a little on top. Spoon tomato relish over and serve the rest of all the above on the side.