I have been promising you a recipe for homemade jelly doughnuts for as many Hanukahs as this site has been in existence, which is to say 9, including the one that begins next week. This might lead you to conclude that I like neither fried food, doughnuts or even jelly, or all over the above showered in unholy amounts of powdered sugar, but this couldn’t be further from the truth, which is that I like them so much that if they want a chance to live out their short shelf-life destiny, they should stay far from my home. 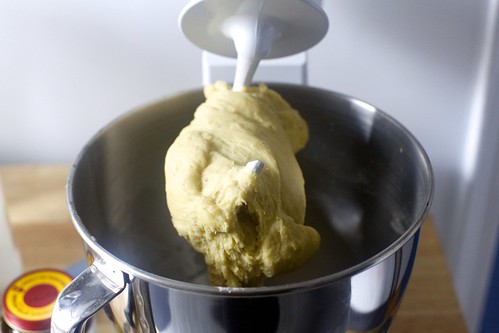 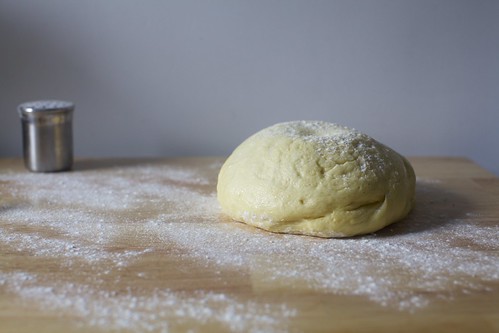 These round jelly doughnuts are sometimes called sufganiyot, or at least when they hail from Israel and are consumed during Hanukah. However, in my vast — for research, guys, just for research! — jelly doughnut studies, I can tell you that there are sugared round versions of these in dozens of other wonderful places on earth. In Germany, these would be called Berliners; in Poland, pączki (I get mine at the Polish butchers on 2nd Avenue; how about you?), in Russia, ponchiki, in Ukraine, pampushky, in Italy, bombolini (swoon), in Finland, munkki (although not all of these varieties are always filled with jam) and, hey, who wants to go on a Fried Dough World Tour with me? 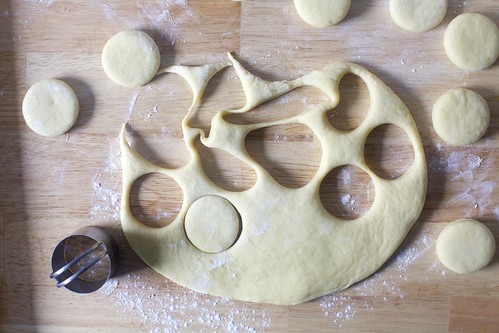 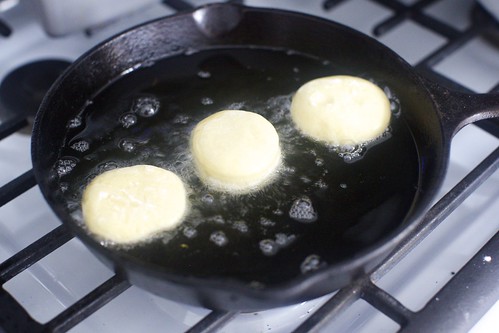 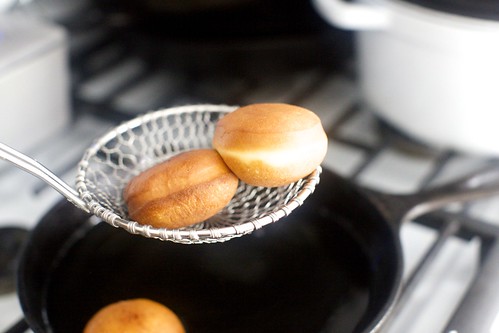 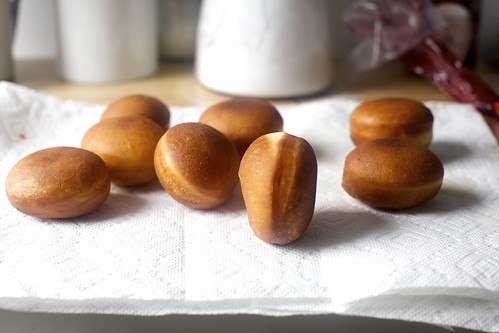 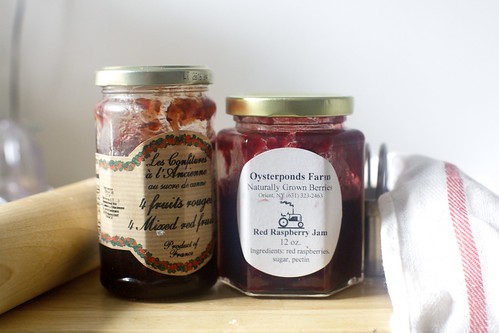 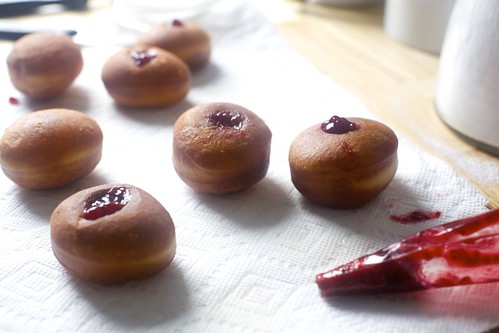 What almost all of them have in common is yeast dough enriched with egg and a bit of butter which gives them a stretchy, rich but not very sweet quality that I find hopelessly addictive. They fry for just a couple minutes each, and are best the first day, which means they are useless in trying to teach anyone the value of delayed dessert gratification, but means you’ll be something of a hero to anyone who has Eat Doughnuts Still Warm From The Fryer on their life list, not that we know anyone like that. 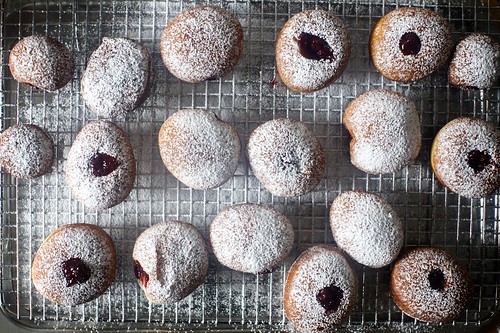 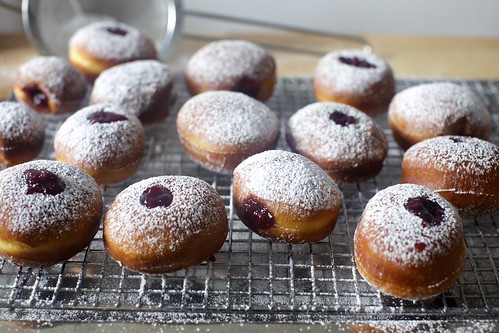 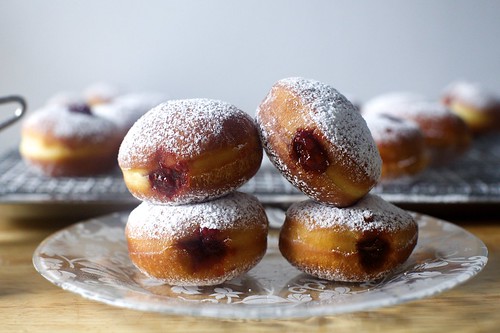 Doughnuts, previously: There are two recipes on this site to date for doughnuts, apple cider doughnuts that should come with a warning for parents of rapidly-growing-up kids — or, at least, me — that they include photos of a one month-old in argyle knee socks slumped over a can of Crisco. [I lost about an hour this week staring at that photo.] Plus, chocolate doughnut holes, which are the perfect party size and include the same curly-haired moppet, now old enough to bang on an empty Crisco can like a drum. Ah, wholesome family memories! Both are excellent recipes, but they are notably absent in my single favorite doughnut quality: yeast. Yeast doughnuts are to cake doughnuts what brown butter is to fresh, what caramel is to plain sugar, what homemade vanilla extract is to anything you can buy in a bottle. Today is the day to make that right.

Next up: NOT a dessert, promise. I know it’s been a bit of a sugar stampede here this last week or two. We’ve got baking on the brain! I also am finding it hard to focus on dinner with so many rugelach pinwheels to make. But here are a few weeknight favorites that, for us, fit the bill but also do not keep us too busy to get all of the fun baking done, too: Cold Noodles with Miso, Lime and Ginger, Twice-Baked Potatoes with Kale, Squash Toasts with Ricotta and Vinegar, Sizzling Chicken Fajitas, Sticky Sesame Chicken Wings, Broccoli, Cheddar and Wild Rice Casserole and Baked Pasta with Broccoli and Sausage

On Pinterest: A visual guide to everything worth baking this month, such as all 71 cookies in the Smitten Kitchen archives and homemade food gifts. Come see!

And for the other side of the world:
Six Months Ago: Valerie’s French Chocolate Cake
1.5 Years Ago: Bowties with Sugar Snaps, Lemon and Ricotta
2.5 Years Ago: Broccoli Parmesan Fritters
3.5 Years Ago: Dobos Torte

Make the dough: In the bottom of a large mixing bowl, combine the yeast, sugar and milk. Let stand for 5 minutes; it should become a little foamy. Whisk in yolks, any zest or extracts you’d like to use, then butter. Don’t worry if the butter doesn’t fully combine.

— By hand: Add half of flour and stir with a spoon until combined. Add second half of flour and salt and stir as best as you can with a spoon, then use your hands to knead the dough until it forms a smooth, elastic round, about 5 minutes. Try, if you can, to resist adding extra flour, even if it’s sticky. Extra flour always makes for tougher/dryer doughnuts and breads. Sticky hands and counters are always washable!

Both methods: If the dough is already in the bowl, remove it just long enough to lightly oil the bowl. Return dough to bowl, cover with plastic wrap and let rest at room temperature for 1 hour, or in the fridge overnight.

On a lightly floured counter, roll dough to a 1/2-inch thickness. Cut into 2-inch rounds; no need to re-roll scraps unless you wish; I like to keep the odd shapes for getting the hang of frying before cooking the final doughnuts. Or, if you’re vehemently against scraps and re-rolling, you can make small square doughnuts, which are surprisingly cute. Let cut dough rise for another 30 minutes, loosely covered with a towel.

Fry the doughnuts: Heat 2 inches of oil to 350°F (175°C) in a cast-iron frying pan (I like using one because it so delightfully re-seasons them) or heavy pot. Use your dough scraps to practice and get an idea of how quickly the doughnuts will cook. Then add about 4 doughnuts at a time to the oil, cooking on the first side until golden brown underneath, about 1 to 2 minutes. Flip doughnuts and cook on the other side, until it, too, is golden brown underneath, about another minute. Drain doughnuts, then spread them on a paper towel-lined plate to absorb extra oil. Repeat with remaining doughnuts.

Fill with jelly: When doughnuts are cool enough to handle, place jelly or jam in a piping bag with a round tip with a 1/4- to 1/2-inch opening. You can fill doughnuts from the tops or sides; I did half with each. Press the tip of the jam bag halfway into the doughnut, and squeeze in the jam until it dollops out a little from the hole. Repeat with remaining doughnuts.

Finish doughnuts: Either generously shower doughnuts with powdered sugar on either side, shaken from a fine-mesh strainer, or roll the doughnuts gently in a bowl of powdered sugar.

Eat at once. Don’t forget to share. These are best on the first day, but my son did not (shockingly) say no to one that had been in an airtight container at room temperature overnight for breakfast this morning, so I guess they’re not inedible on the second day. They will need to be re-powdered, however, as it absorbs into the doughnuts overnight.

To make these dairy-free: You can use warm water, soy, almond or coconut milk instead of the dairy milk, and coconut oil, shortening or margarine for the butter.