A friend from high school texted me a couple weeks ago to say that he’d made the Spinach and Cheese Strata for Christmas morning brunch and it was a big hit. Ever the smartass, I asked him where he’d found a whole room of people willing to eat bread and he said that this was Pittsburgh, where every salad has french fries on it and I said it sounded like a heavenly place and then he pointed me to this to prove his point. 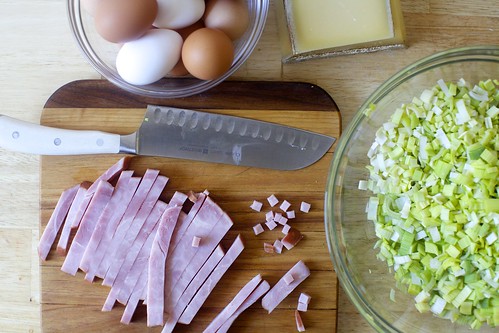 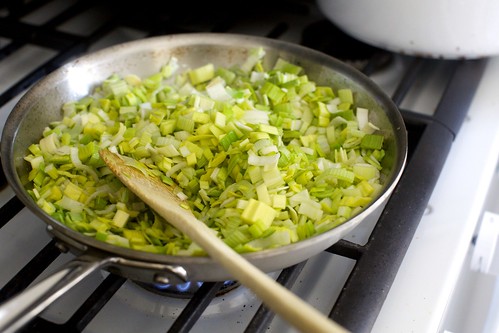 Joking aside, even when Celiac is not an issue, odds are good that in any room these days you’re going to find one or two people who do not — sometimes it’s even me! — and if that room is your living room and you’re hosting brunch, it might mean that your brunch standard is in need of an update. 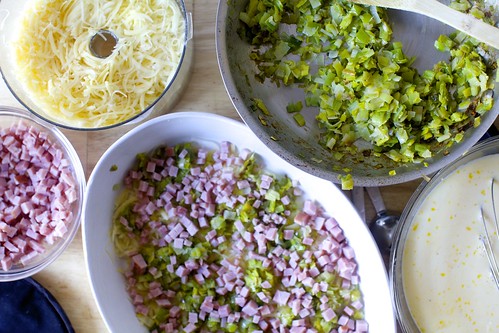 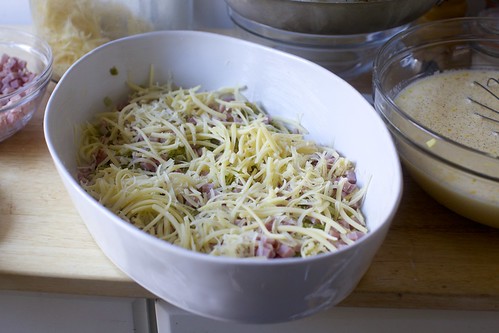 And so it was on New Year’s Day that I had invited our families over for brunch, because although I already had too much on my plate, it was still not enough that I was more willing to fight for a 10-person table to eat overpriced, underwhelming eggs* and the polite thing to do was to accommodate everyone. What I really wanted was to make a giant crustless quiche with ham, cheese and piles of sautéed leeks — like a big baked omelet but more custardy — but I couldn’t find a template anywhere that fit what I wanted and so I just threw a bunch of things together in a baking dish a little before people got here, wrote almost nothing down and took no pictures, which means the predictable happened: 1. It took disastrously long to bake (don’t worry, I’ve fixed this), so long that I lost track of time and we basically had it for dinner. 2. It was actually crazy delicious, meaning if I ever wanted to make it again I was going to have to rely on memory and mine is so compromised these days I can barely remember what the first part of this sentence was about. (Maybe it’s you guys we should pity on that note.) 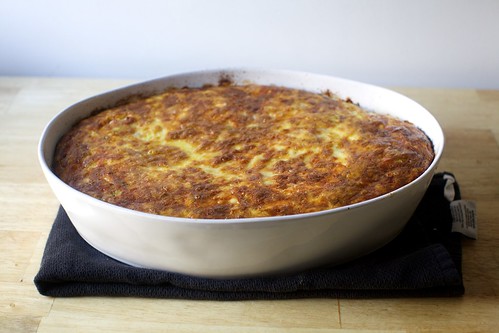 Thus, with a storm a-brewing and much “forced” (oh, how “sad” we’ll be) weekend lazy-ing ahead of us, it seems the perfect time to get this in your oven and feast for days. It’s rich and rustic, going spectacularly well on toast but also with a wedge of this kugel (also gluten-free and serves a crowd) and a side of greyhounds (if vodka representation is as essential in your family as it is in ours). And it turns out it reheats really well so it can be breakfast or brunch or making-dinner-is-overrated-anyway several days in a row, which is how we’re rolling this week. I highly recommend it. 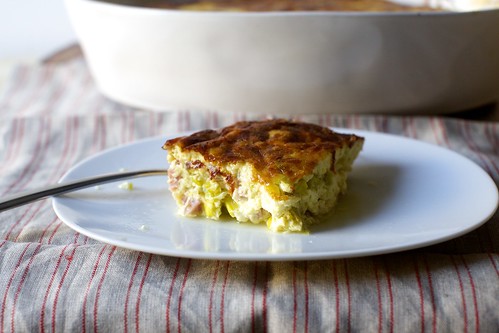 * Shouldn’t this be all of our mantras? Thus… [New] We’ve built a little Brunch Menu Planner! Pick a recipe from each section (Sweet, Savory, Fresh, Pastry, Drink) or choose your own adventure. [Smitten Kitchen Brunch Menu Planner]

And for the other side of the world:
Six Months Ago: Tomato and Fried Provolone Sandwich
1.5 Years Ago: Summer Squash Gratin with Salsa Verde
2.5 Years Ago: Hot Fudge Sundae Cake
3.5 Years Ago: Peach Pie
4.5 Years Ago: Charred Corn Tacos with Zucchini-Radish Slaw

One big note, as I failed on this both times so do as I say and not as I did, is to Beware The Weep. Eggs baked too long can emit a watery run-off, which I, a non-food-scientist so feel free to chime and correct/clarify, understand comes from proteins in the eggs overcoagulating. To avoid this, bake this just until it’s done and the safest way to do that is to start checking in before you need to (I’ve suggested this in the recipe). It’s done when no liquid egg seeps into the gap formed where a knife inserted into the center and turned or pulled back slightly or a temperature of 165 to 170 degrees. Should your eggs weep, you’ll see this at the bottom of the dish as a little puddle that will have absolutely no effect whatsoever on the taste; it’s just a thing that will bother you, the cook.

Heat a large skillet over medium heat. Add 1 to 2 tablespoons olive oil and a tablespoon of butter. Once hot, add leeks (and onions, if using) and season generously with salt (I use a full teaspoon kosher salt) and pepper. Cook, stirring, until they’re tender, sweet and just starting to brown, about 10 to 15 minutes. Lower heat to medium-low if they’re picking up color too quickly.

Beat eggs with salt (I used another teaspoon kosher salt, adjust to taste) and a lot of freshly ground black pepper. Whisk in milk.

Assemble by layering in prepared dish: 1/3 of grated cheese, 1/2 of each leeks and ham, next 1/3 cheese, remaining leeks and ham. Pour eggs over then sprinkle remaining cheese over the top.

Bake until gently set in center, being careful about overbaking (see note up top). It’s done when no liquid egg seeps into the gap formed where a knife inserted into the center and turned or pulled back slightly or a temperature of 165 to 170 degrees. Start checking at 55 minutes and then every 5 minutes after that until it’s done. Mine took a total of 65 minutes. Should the top brown too much before the center is set, put foil over the baking dish for remaining baking time.

Let rest on a cooling rack for 5 to 10 minutes before serving, or risk a room full of burned tongues. (It packs serious heat!) Serve in squares or scoops.