This began pretty harmlessly; my husband told me recently that whatever magic they roll buffalo wings in (basically: a lot of butter and Frank’s hot sauce) was unquestionably one of his favorite flavors on earth. (I put the jar of Nutella in the cabinet on notice.) A few days later, I spotted an ode to buffalo wings in the format of caramel popcorn and sent him the link, joking that I’d probably regret it. I shouldn’t have joked. It quickly became clear that to know that this popcorn existed and to not make was an act of cruelty; why so mean, Deb? Is writing a cookbook, running a website, occasionally cooking dinner and mashing up sweet potatoes for the little sweet potato really a higher kitchen calling than buffalo wing popcorn? And so I made it, but it looked rather sad and lonely in the bowl by itself so then I made some blue cheese dressing on the side with celery to dip into it and, lo, it was wonderful and the story should end here. 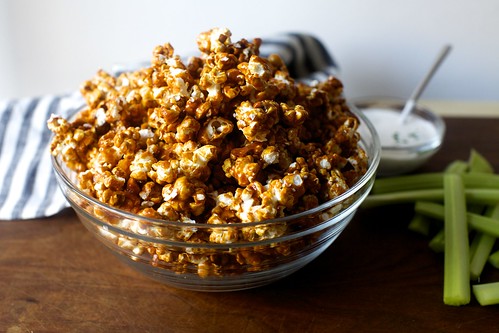 But you don’t need me to tell you how to make Buffalo Wing Popcorn, Bon Appetit can do that for me. Instead I’ll tell you what happened next which was that the miso I’d picked up for a different recipe started calling to me and I remembered all of the miso caramel sauces that cropped on menus and recipe pages a couple years ago and had to find out what it would do to caramel corn. 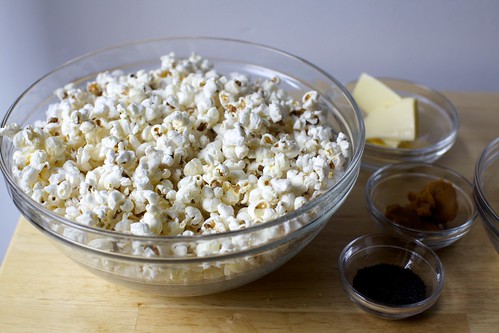 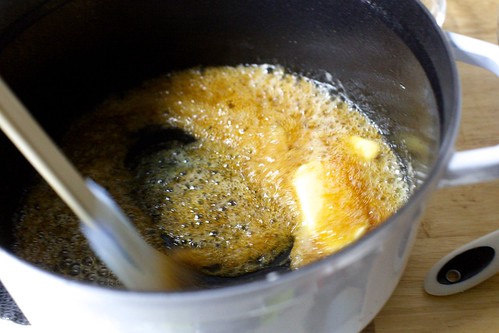 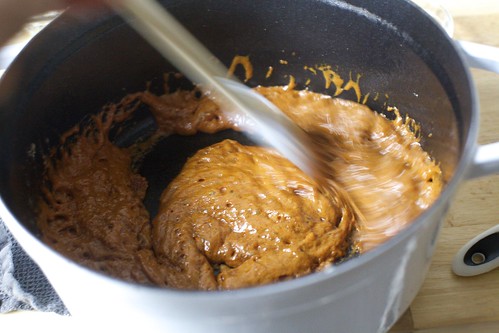 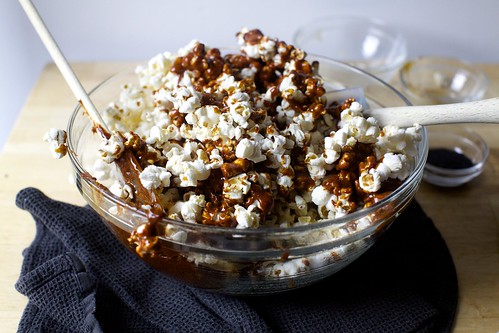 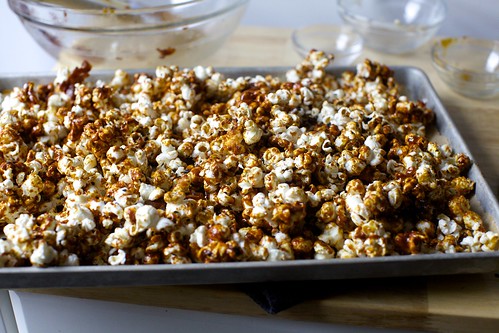 Amazing things, it turns out. Miso is deeply fermented, salty and a little earthy with a depth of flavor that plays off the buttery-sweet-faint bitterness of caramel in a satisfyingly balanced way. With the addition of nutty black sesame seeds, I couldn’t stop eating it and found my allegiances torn. Shouldn’t all stories conclude with a winner? In this frenetic electoral season, don’t we deserve clear conclusions? Well, no, it turns out. It turns out that the answer to which one you should make is both, because why have 8 cups of happiness if you could have 16? You’ll thank yourself on Sunday, when these disappear in a breakneck cacophony of crunch. 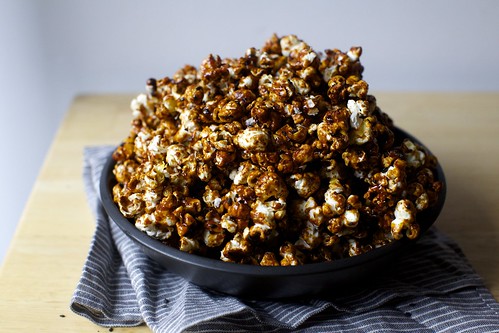 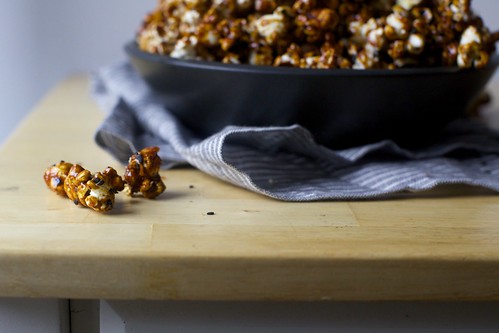 Heat oven to 300°F. Line a rimmed baking sheet with parchment paper; set aside. Lightly coat parchment and a the very largest bowl you own with nonstick spray.

Place 2 tablespoons oil and 2 to 3 kernels in a 3-quart or larger pot. Turn heat to medium-high and cover with a lid. When you hear these first kernels pop, add the remaining kernels and replace the lid. Using potholders, shimmy the pot around to keep the kernels moving as they pop. When several seconds pass between pops, remove from heat. Transfer to coated bowl. You should have about 8 cups popcorn.

Wipe out pot you used to pop corn. Add sugar and water to it, and bring to a boil over medium-high heat, only stirring until sugar has dissolved. Boil, swirling pan around (wear potholders) until caramel is a deep amber color, which took about 8 to 9 minutes in my already-heated-from-the-popcorn pot. Remove from heat and stir in butter (mixture will hiss and bubble furiously). Return to stove, reduce heat to medium-low, and cook for another 2 to 3 minutes, removing from the stove if it appears smoky sooner. Remove from heat and whisk (a whisk will best break it up) in the salt, baking soda and miso.

Quickly pour it over the prepared popcorn and toss to coat. You’ll be glad you used a gigantic bowl. I use two silicone spatulas to mix it up because it’s a messy project and popcorn will want to fall out. Whatever you do, do not pick up any caramel-coated popcorn that falls out unless you like burned fingertips. (Wait until it cools.) Coat popcorn as best as you can, but don’t fret if there are gaps.

Spread popcorn on prepared baking sheet. Sprinkle sesame seeds over. Bake in oven, tossing occasionally (which will also help coat any scantily-clad popped kernels) until mixture is dry, about 15 to 20 minutes. Let cool completely on baking sheet, then break it up into a large bowl.

Do ahead: Keeps at its very best for 4 hours. Longer, it can be stored in containers or bags at room temperature, but if the day is humid, it might get just a tiny bit sticky. Nobody will care.