It’s been two months since I told you I was California dreaming and I fear it hasn’t passed. I thought maybe I just longed for warmer weather, but spring has more or less arrived and I no less crave avocados that don’t require a week of hovering to capture their narrow window of edibility. I thought maybe I just needed a vacation, but we took a short one and I still found myself looking at photos from a certain large music festival in the Coachella Valley and thinking it looked kind of fun. (WHO AM I.) And last month, I went down a date shake rabbit hole and I haven’t come out since. At least these we can easily make at home. 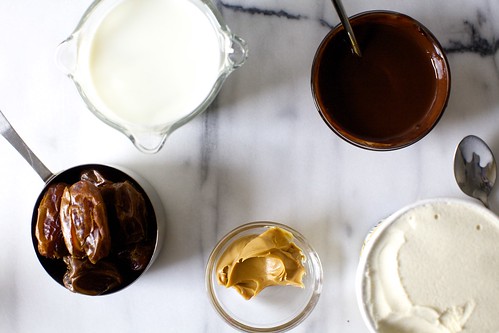 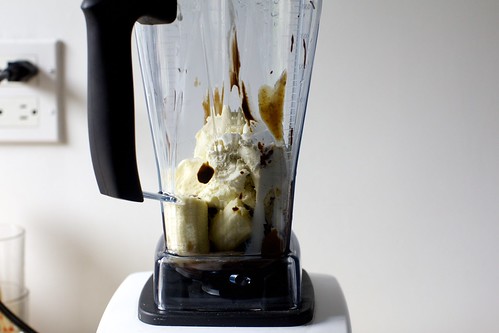 Date palms were planted in the desert between Palm Springs and the Salton Sea as early at the 1890s, but they suffered a popularity problem — mostly people considered them obscure curiosities. As the old people say, necessity is the mother of invention, or in modern terms, all that was needed with the right marketing campaign, and Russ Nichol, a date farmer, landed on the perfect one in 1928, building a roadside shack making milkshakes and malts blended with his oversupply of dates. It wasn’t long before it became one of the iconic symbols of Palm Springs. 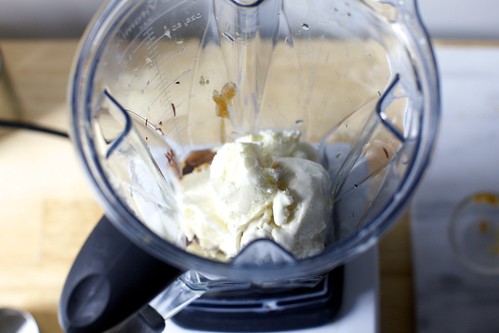 I’m sorry if this comes as bad news if you were imagining your new breakfast cleanse, but the Palm Springs Date Shake long predates California as an bastion of healthy cuisine. The date shake is two scoops of vanilla ice cream, a glug of milk and blended dates “without folderol,” a description from Jane Stern that might also be my new favorite word. But you knew I’d manage to find some, didn’t you? It was in my research that I learned about the Monkey Flip also popular at these shake shacks — this version with banana, peanut butter and chocolate syrup. Why choose when you can make both? was my husband’s suggestion, and really, he’s never wrong. 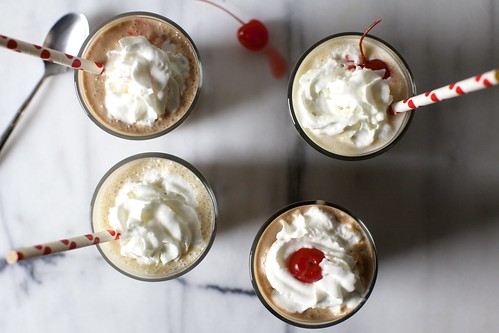 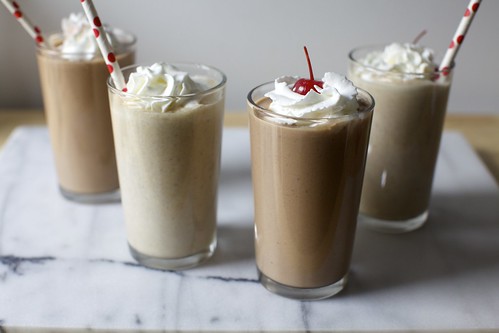 And for the other side of the world:
Six Months Ago: Twinkie Bundt and Oven Fries
1.5 Years Ago: Cauliflower Cheese and Squash Toasts with Ricotta and Cider Vinegar
2.5 Years Ago: Potato and Broccolini Frittata
3.5 Years Ago: Butternut Squash Salad with Farro and Pepitas and Roasted Pear with Chocolate Chunk Scones
4.5 Years Ago: Pear Cranberry and Gingersnap Crumble

If you’d like the smoothest date shake: Pour boiling water over dates in a medium bowl, cover with a lid and let steep for 10 to 15 minutes (longer if you have time). Blend both water and dates in blender until smooth — it will seem like too much water at first but will eventually become a thickish puree. Transfer to freezer for a few minutes to cool it, if it’s not cold enough already. Add date puree back to blender bowl, if they’re not there already.

If you don’t mind some nubby bits of dates in your shake: Blend dates with a splash or two of the milk until they’re finely ground.

Both methods: Add nutmeg, milk and ice cream and blend until smooth. Pour into glasses, top with whipped cream and a cherry.

To Make A Monkey Flip

Use all the ingredients above, plus 1/4 cup smooth peanut butter, 1/4 cup chocolate syrup and 2 medium bananas and blend until smooth. You’ll end up with 5 small (8-ounce) shakes instead of 4, but that last one can be your little secret.