So, ahem [taps on microphone]… In the summer of 2014 I announced that I had not learned my lesson the first time and would be writing another cookbook. My editor and agent told me the second book always goes faster; it’s like they didn’t think I’d rise to the challenge. This 2015 release might have had some (tiny, adorable) effect on a rain-checked 2016 release, but as the first Smitten Kitchen Cookbook approaches its 5th birthday, the wildest thing has happened: this second book I promised you is (at last) out of my hands and headed to the printers.

Smitten Kitchen Every Day: Triumphant & Unfussy New Favorites will be released on October 24th and I cannot wait to share it with you. I hope more than anything that it’s worth the wait.

Why triumphant and unfussy? Over the last 5 years, I’ve had a lot of “opportunities” (heh, we call it “Hangry O’Clock” and it’s quite loud) to think about what cooking more often with less time means but when I realized I didn’t want to write the book that is usually expected in this category — 20 minute meals, 7 ingredient fixes, and/or my suggested and swiftly rejected title, wait, didn’t we just feed you guys yesterday? I got stuck.

I didn’t want a book whose goal was to rush you out of the kitchen the second you began to unwind.

I didn’t want to operate from the assumption that cooking is drudgery, when for so many of us, it’s a much-needed escape.

I didn’t want to waste anyone’s time, but I also knew that a recipe that takes 10 minutes longer isn’t necessarily a deal-breaker if those 10 minutes make it infinitely better.

And I wanted to talk about the fact that the more we cooked, the more people we crowded around the table, the more fun we were having.

This is the result: these are the recipes for the food that makes us happy. This doesn’t mean that this book isn’t full of practical recipes that fit into a busy life, it simply means that they don’t do this before — they don’t prioritize it over — making food that we are really, really excited to eat.

It’s a Hopelessly Unapologetically Inauthentic Caesar Salad that we make almost every week of the year from a dressing that seems to keep in the fridge almost indefinitely, so we make a big jar of it. It’s a crumb cake that — even after 10-plus years of having cakes and other goodies around as I test recipes — has proven to be my match: I cannot be near it; it’s not safe. It’s breakfast-style sticky toffee pudding and potato skins, and this giant picnic sandwich that might be alone enough reason to become a person who picnics. There’s a succotash full of wanderlust and tacos from such exotic places as the Jersey Shore. There’s a whole section of soups and stews, and I hope not one of them is predictable. There’s a massive section of vegetarian mains, even more than last time, but also the kind of steak salad I make when lots of people come over. I hope you’ll find the last one-bowl, no-sweat birthday cake recipes you’ll ever need in unlimited shapes and at least 24 flavor combinations, and I bet you can imagine how just reading that last part makes me grateful for the cocktail and mocktail that cap off the book. There are so many recipes in there I’d been jotting in the margins for so many years, that it’s torture not to be able to share everything already.

As of today, the book is available for preorder almost everywhere books are sold.

A little something extra: I realize that 5 months is a bit long to wait for a book you’ve ordered, so — and I’m sorry, this is only something I can do in the U.S. — as a thank you, if you’ve preordered Smitten Kitchen Every Day, email me (at aaknopf@randomhouse.com) your address and confirmation number any time in the next two weeks (end date: May 30, 2017) and I’ll send you a bonus recipe, one we couldn’t make fit, no matter how we tried, in the mail. It is covered in sprinkles and that’s not even the best thing about it.

* And here’s some legal stuff I’m required to say about this.

Giving this as a gift?: We’ve created downloadable, printable certificates for anyone you’ve preordered the book as a gift for, to let them know. You can pick the look: This one has an outtake from the front cover. This is an an outtake from the back cover. (And yes that’s cake, so much cake.)

Now I want to talk about the cover: It’s a dish I call Cacio e Pepe Potatoes Anna and we love it for a great many reasons. The cacio e pepe part comes from becoming infatuated with the dish when we went to Rome a few years ago. The best cooking uses simple ingredients to create much more than the sum of its parts, and this pasta dish, whose flavor hinges on sharp, salty pecorino cheese and the sparkly heat of black pepper and absolutely nothing else, is one of the best examples I know. But I didn’t put it on pasta; I put it on something of a poor man’s pommes Anna. Potatoes Anna is a classic French dish of thinly sliced potatoes cooked in a significant amount of clarified butter, layered to form a cake that’s flipped in a pan on the stove every 10 minutes until the outside is golden and crispy. A potato galette is for people who live their lives outside restaurant kitchens — or, perhaps, have a curly-haired tyrant named Anna in their lives. 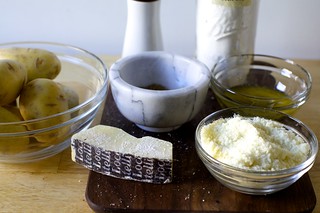 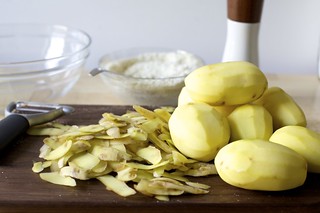 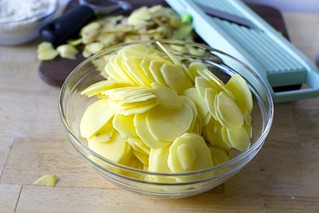 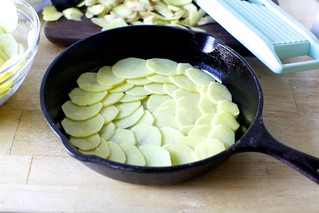 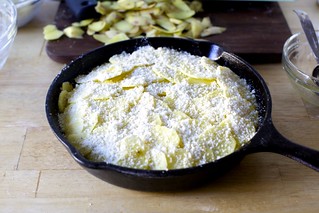 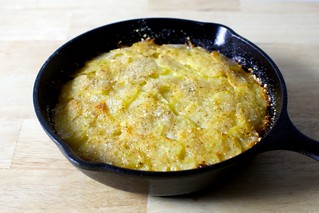 This version is far more hands-off but doesn’t skimp on the best part, which is that it looks like a crown of potatoes and tastes a tiny bit like a potato chip casserole, with deeply bronzed and crisp edges and a baked-just-so center, infused with salty cheese and a warming kick of pepper. With a salad of lightly dressed greens, it makes a pretty luxurious simple dinner. As a side dish, it steals the show. With an egg on top, well, I can no longer remember why I ever eat anything else. 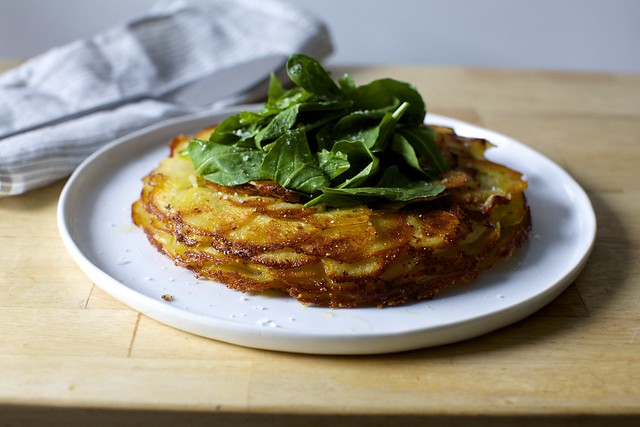 Assemble the potatoes: Heat your oven to 375°F. Combine the cheese, potato starch or cornstarch, salt, and pepper in a small dish. Taste a pinch; you want it to have a strong salty-peppery kick, because it’s going to be distributed all over the galette.

Pour 1 tablespoon butter or oil into the bottom of a 9-inch-diameter cast-iron or ovenproof skillet, and swirl it up the sides. Arrange the potatoes in overlapping concentric circles in a single layer at the bottom of the pan. (This will use approximately a quarter of your sliced potatoes.) Drizzle with 1 teaspoon butter or oil, and sprinkle with 2 tablespoons of the cheese-pepper mixture. You’ll need to repeat this three or four times to use up your potatoes (depending on their size). At the end, you should have about 1 tablespoon cheese-pepper mixture left over; reserve this. Drizzle any remaining melted butter over the top.

To bake: Lightly coat a piece of foil with nonstick spray and cover the skillet tightly with it. Put in heated oven for 35 minutes, at which point the potatoes will be almost tender. Use potholdered hands to press firmly on the foil to compact the potatoes a bit. Remove and reserve the foil and bake for 25 to 30 minutes more, until lightly brown all over. Press again with the foil, remove, then briefly run under the broiler for an even golden-brown finish.

To finish and serve: While the galette bakes, toss the arugula with the olive oil and vinegar, keeping the dressing very light.

Once the galette is out of the oven, let it rest in the skillet for a few minutes before running a knife around to ensure that it is loose. Gently tip the skillet over your sink to drain any excess butter or oil. Invert it onto a plate or cutting board, then flip right side up. Cut the galette into wedges, then top with the dressed greens, and sprinkle with the reserved cheese-pepper mixture.

Do ahead: This galette can be made up to 3 days in advance. Rewarm at 350 degrees for 15 minutes with foil on top.

* Email your name, mailing address, and preorder confirmation number from your order receipt for the Smitten Kitchen Every Day cookbook by Deb Perelman to aaknopf@randomhouse.com to participate in this bonus offering, while supplies last. Must be 18 years of age or older at the time of entry. Void where prohibited or restricted by law. No groups, club, or organizations may participate. Limited to one request per IP address. Incomplete forms will not be eligible. Multiple entries from the same email address will be automatically disqualified. US mailing address required. Please allow 5 weeks for postcard to arrive by mail. Offer valid between May 15, 2017 and May 30, 2017.