Last year, I proudly announced my intentions to host a Friendsgiving dinner for our crew and we would do it up. About 15 minutes later, I remembered that I had an infant and a zillion other less cute things on my plate and came to my senses. This year, I am a woman unwaveringly of my word, and I have 9 days to get my act together. 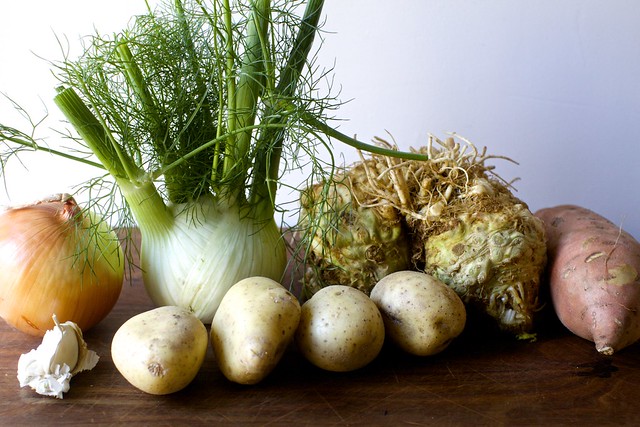 Ina Garten (pause for reverence/praise-hands emoji) is here to save me, though, as she has a new cookbook out. Maybe you’ve heard about it? This one is about all the favorites she’s cooked for her husband over the years, which sounds of course terribly old-fashioned and yet, perhaps I’m just feeling a little extra sappy* this week, but it’s hard to find the gesture itself anything less than unambiguously lovely. “There’s nothing more comforting than walking into a house that smells like there’s a roast chicken and onions or a homemade apple pie in the oven,” Ina writes in the introduction, and talks about the way having people around the table creating “a community of friends that take care of each other,” which, for her, is the whole point of cooking. Needless to say, this ties neatly into holiday themes. 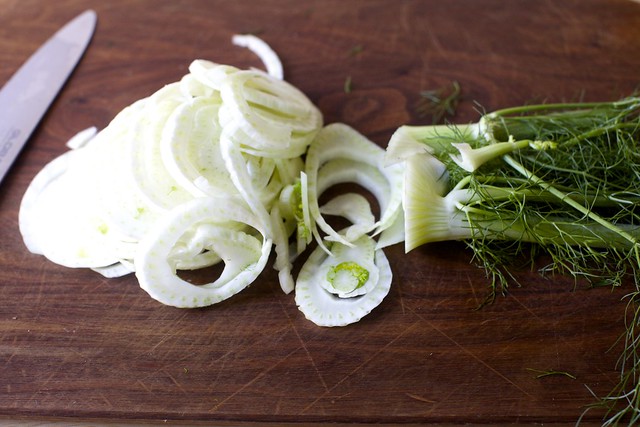 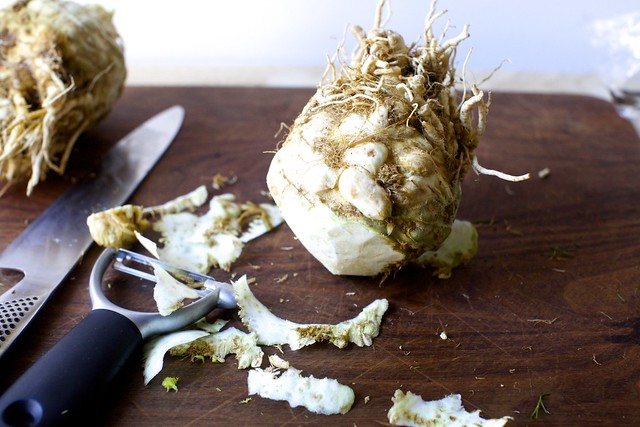 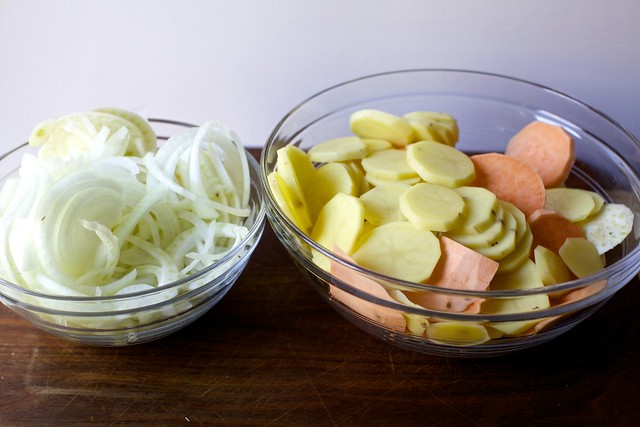 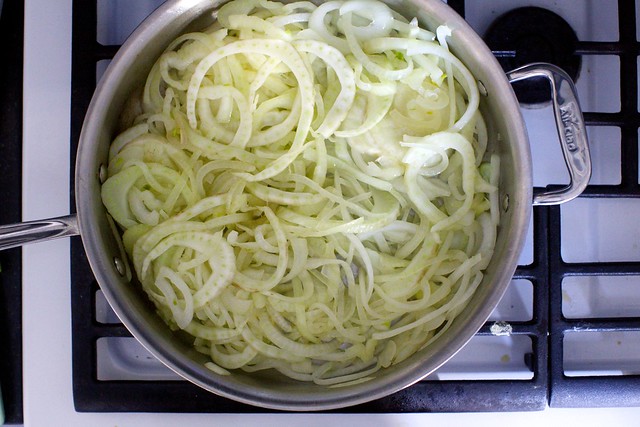 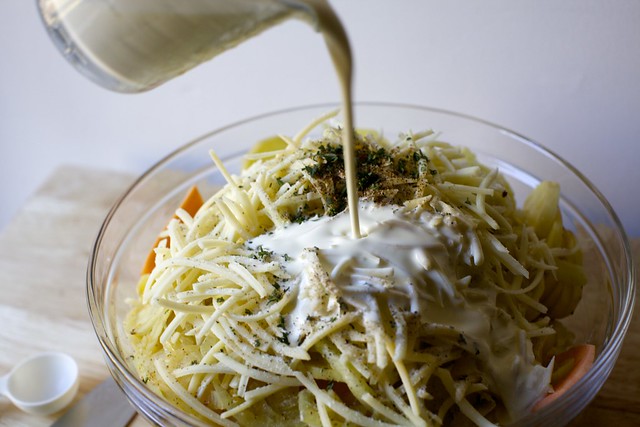 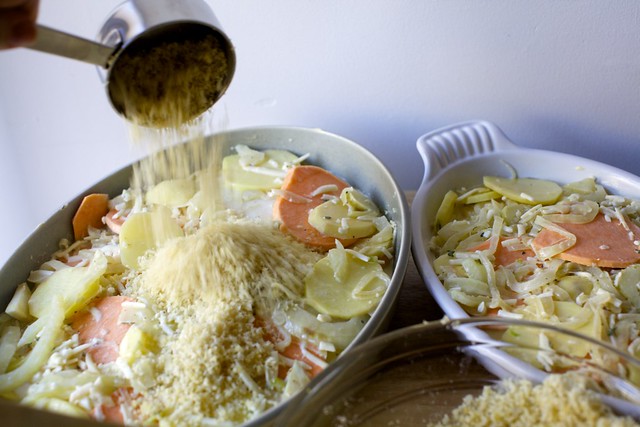 On Thanksgiving, however, I am of one singular stance: Team Casserole. I don’t just mean green beans (but, ahem, if you’re looking for un-goopy ones…), but basically anything that is baked in a large dish is often something that can be cooked long in advance, reheats and even holds heat well — essential when I have not even close to enough oven space to heat multiple dishes at once — is preferred over dishes that do not (last-minute sautés, roasting vegetables on sheet trays, etc.) Gratins are at the top of this list, and while there’s no rule that they all need to be swimming in cream and cheese, I think one rich one makes everyone happy. This gets my vote. It showcases a range of root vegetables but none that I don’t like (coughbeets) and tastes fantastic. It feeds a crowd and keeps really well. It smells amazing too, the kind of aroma that envelops you when you walk into the apartment and makes you feel, however briefly, like you are exactly where you were meant to be and maybe everything will be okay. 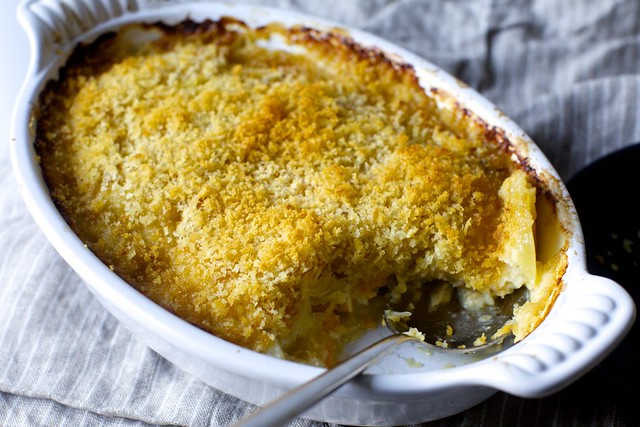 * The U.S. election season began 19 excruciatingly long months ago and maybe you noticed, maybe you didn’t, but I don’t talk about politics here, or really most places because

a) nobody’s mind has ever been changed by a political post on social media,
b) you don’t need to a mad scientist to deduce what my leftie/pinko/femi-nazi/riotgrrl views are and
c) political discussions bring out the worst in people and I rather like you all.

The last is the big one. One of the possibly-weird things I think about all the time with this site is hospitality — and I don’t mean schooling others on it because I am so not that kind of domestic diva. Mostly, I mean trying to be as good of a host in this space as I can be. My hope is that this site could be a place where people who want to talk about cooking or are hungry to make something new or different or better or bored enough at work to listen to me prattle about some of my breakfast/dinner/cake theories might come to hang out.

Or maybe, if I could have such hubris to hope for this, it could be also a respite from the rest of the chaotic web because there are no “wild wests” here, I am inside that comment section every single day fielding all the questions and concerns I can. Perhaps because I do so from my living room, I don’t necessarily differentiate it from what I’d want to happen there too. Nobody’s going to tell you you have to buy fancy butter or xyz brand of anything to make a recipe work. Nobody’s going to judge you if you use storebought broth or take any and all shortcuts that work better for you. Why should this judgement-free zone end with cooking? You could argue political stakes, especially these, carry a bit more gravitas than butterfat percentages, and you’d be absolutely correct, but that brings me back to A. Nobody would leave here happier than they arrived or likely with what they came for and then there would be less breakfast/dinner/cake for all of us.

This is all to say that on a personal and family note, it’s been a sad, rough week. But one thing I can easily change how well I understand things next time. For me, the next step looks like this.

And for the other side of the world:
Six Months Ago: Crispy Tortellini with Peas and Proscuitto
1.5 Years Ago: Liege Waffles
2.5 Years Ago: Fresh Spinach Pasta
3.5 Years Ago: Japanese Vegetable Pancakes
4.5 Years Ago: Warm, Crisp and a Little Melty Salad Croutons

Once I realized how much this made, I divided it between two pans, one 3-quart baking dish and one 1-quart, freezing the larger one until I need it.

Garten’s original recipe calls for 1/2 cup chicken broth and 2 1/2 cups heavy cream. I do not like gratins to be this rich and find much less cream goes a long way to impart richness, but not the kind that muffles flavors, so I used 2 cups broth and 1 cup cream. I also love mascarpone and/or creme fraiche in a gratin; you could use 1 cup of either here with an extra glug of milk or broth.

To make this ahead of time, you have many options but since a dish like this doesn’t need to be baked a la minute to taste good, I’d go ahead and assemble and bake it as soon as you can. If just 1 to 3 days out, keep it in the fridge. 3 or more, freeze it. Make sure it spends a day in the fridge defrosting and then an hour on the counter shaking off its final chill before going in the oven (the last part mostly about protecting your stoneware, should it not be a friend to big temperature changes).

Heat 2 tablespoons olive oil in a large deep (ideally 12-inch) saute pan over medium heat and add the onions and fennel. Cooking, tossing occasionally, until lightly browned and tender, about 10 minutes. Add the garlic and cook for one minute more.

Meanwhile, in the largest bowl you own, combine the onion mixture with remaining vegetables, cream, stock, cheese, thyme, 1 tablespoon kosher salt and 1 1/2 teaspoons black pepper. Pour mixture into prepared dish and spread until even. Mix breadcrumbs and butter until evenly coated and distribute evenly over top of dish.

Bake 1 1/2 hours uncovered, or until vegetables are very tender when tested with a small knife and the top is browned and bubbly. Allow to set for 15 minutes at room temperature and serve hot.