Here are a few things I know to be true: Split pea soup is never going to win the winter soup Olympics. Its signature hue of mushy pea green will never be prized as fashionable by anyone but the unfashionable likes of me. If you know people who stand up and cheer when they hear that it’s a split pea soup for dinner kind of evening, you know amazing, rare unicorn people I would like to have over for dinner more often. It could be argued that split pea soup doesn’t help its cause by its, ahem, mushy texture that usually solidifies into a brick in a fridge overnight, which is why it surprised me as much as it did that when I mentioned making it — along with this black bread — in this food diary I kept for Grub Street last week, so many people asked me for the recipe. 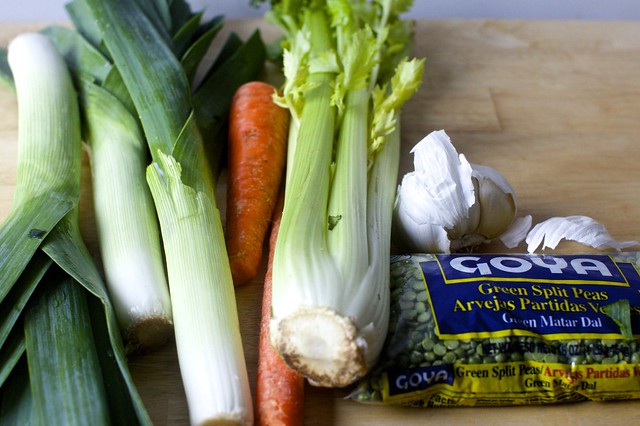 I had been eating split pea soup for at least half my life before I realized it was not traditionally a vegetarian soup. Growing up, my mom made it from, well, tubes from the grocery store that included the dried peas and a seasoning packet I thought the results were above reproach. The fact that it was usually from Manischewitz probably could have explained the absence of ham hocks, but I don’t like to jump to conclusions or anything. 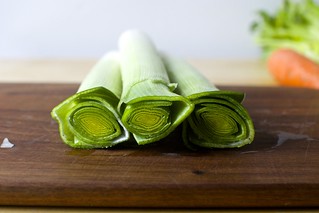 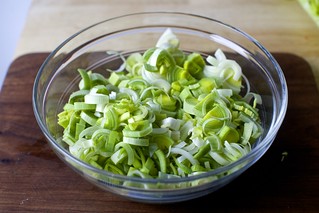 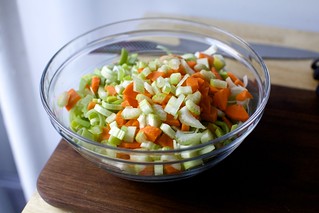 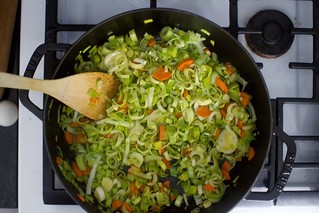 The times I have made it with ham hocks, I didn’t find it life-changing, for me, it didn’t add enough to be worth changing my usual approach — a solid enough filter for any new recipe decision, you could say — which is a pile of vegetables and aromatics, broth, and split peas, cooked until tender and then pureed in all or part, and generally, if we’re being completely honest here, swiftly rejected by most people in my family for all the reasons lists above. 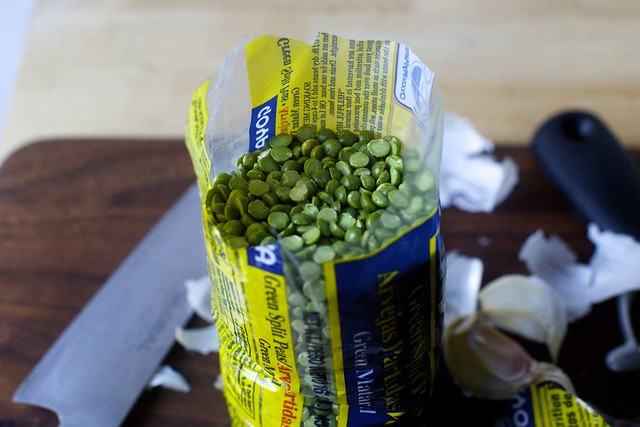 But I think this most recent version is onto something. A lot of vegetarian split pea soups add potatoes for bulk, but I find it only further mutes a muted soup’s flavor. Instead, I swapped out my usual chopped onion with a few thinly sliced leeks and loved every bit of the results. I kept the carrots and celery, but then, right when I was about to puree the soup I realized somehow for the first time that it might not need it at all? Peas, split, naturally collapse in soup so the texture was already halfway smooth; why nudge it further? I then tried three different finishes. No, I’m not suggesting you need to finish this soup three ways, I just couldn’t decide. The first was a green sauce with parsley, lemon, and garlic, basically a vegetarian gremolata, which usually contain anchovies too. (A salsa verde would be great here too.) Then, a dollop of sour cream. Finally, because I said I didn’t like ham inside the soup but said nothing about on top, we added a bit of crispy bacon in small bits, but I also love it topped with croutons (either gruyere or these lovelies) should you wish to keep it meatless. Any one or even two of these toppings really lift the soup so choose your own adventure. 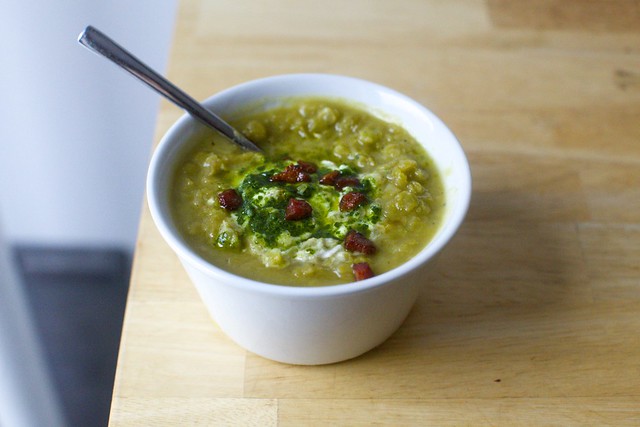 And for the other side of the world:
Six Months Ago: Confetti Party Cake
1.5 Years Ago: Peaches and Cream Bunny Cake
2.5 Years Ago: Green Beans with Almond Pesto
3.5 Years Ago: Blue and Red Berry Ricotta Galette
4.5 Years Ago: Slow and Low Dry Rub Oven Chicken

If you miss the ham, you can add about 1 to 2 cups of diced cooked ham in the beginning and brown it up with vegetables.

I make a quick and hasty herb sauce by blending 1 large or 2 small, peeled garlic clove(s) and a couple handfuls of fresh flat-leaf parsley leaves (or a mix of herbs, such as mint and/or cilantro, that you’d like here) with the finely grated zest of half a lemon, salt, and red pepper flakes until well chopped and then drizzling in olive oil with the machine running until the mixture becomes saucy. Season with more salt and pepper. This sauce keeps in the fridge for a week and is also great on roasted potatoes, squash or even fried eggs.

On the stove: Heat a 4 to 5-quart heavy pot over medium. Add oil, or oil and butter, and once warm, add leeks, carrots and celery. Season with salt and pepper and cook until softened and beginning to get slightly brown at edges, about 10 minutes. Add garlic and cook two minutes more. Add the dried peas and stir to coat with the vegetables, then add the vegetable stock or broth, thyme, if using, and bay leaf. Increase the heat to bring the mixture to a simmer, then reduce to a low simmer and cook, partially covered, until peas have softened, 50 to 60 minutes. Remove thyme sprigs (most of the leaves will have fallen off) and bay leaf and season very well with salt and black pepper.

In an InstantPot or electric pressure cooker: Set your pot to sauté and cook the vegetables as written above. Once you’ve added the stock, dried peas, and herbs, cook the mixture under high pressure for 15 minutes and then let it naturally release for at least 5 minutes manually releasing it the rest of the way. Remove thyme sprigs (most of the leaves will have fallen off) and bay leaf and season very well with salt and black pepper.

Both methods: I do not puree this soup, but you can at this point with an immersion blender, either all or just halfway. Ladle soup into bowls and finish with garnishes of your choice.

Do ahead: Split pea soup keeps fantastically in the fridge or freezer but, just to warn you, it looks crazy thick once it has chilled. It should loosen as you rewarm it, but if it doesn’t enough to your liking, add another splash of broth or water as needed.