About a year ago, over a series of weekends I was up too early anyway, I went on a buttermilk pancake-making bender. I tried, well, not all, but several of the recipes I always read about, the loftys and the fluffys and the best-evers. I used, in turn, cornstarch and vinegar and unseemly amounts of butter, I separated egg whites, I rested batters, and every single one of these pancakes was consumed by happy children but not a-one of them stayed as tall as they left the pan for more than a few minutes and I was gravely disappointed. It was very possibly user error; all pancakes were made before 8:30 a.m. on weekends, pre-coffee. Regardless, I tabled it and moved on. 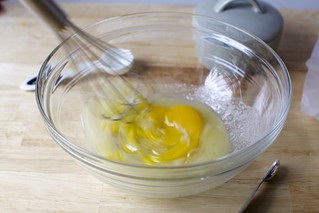 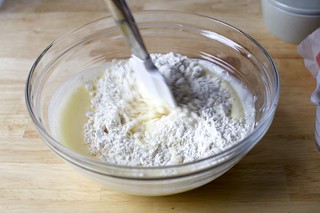 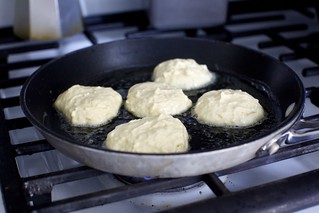 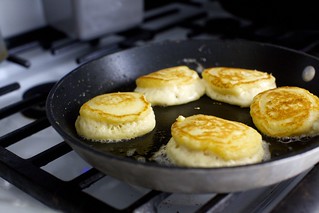 Recently, in an attempt to extract myself from the 1008-page book I began in the fall and needed to accept I was probably never going to cross the halfway point of, I read Nora Ephron’s Heartburn. I honestly didn’t know the narrator was a food writer going into it but this made it even more delightful.* (I promise, I’m getting somewhere with this.) In some passage that I now cannot find, she essentially says that there are very few truly new recipes, that most things have been made well before, and this led me to send my kid to take down the 1896 Fannie Farmer cookbook with and look up her pancake recipe. “It’s not in here.” “Yes, it is. Look in the index.” [I think library science lessons are a small price to pay for pancakes, don’t you?] “I did, there are no pancakes.” But I knew there were pancakes in there and grabbed the book from him and hrm, he was totally right, there were no “pancakes,” but there were many recipes for “griddle cakes.” 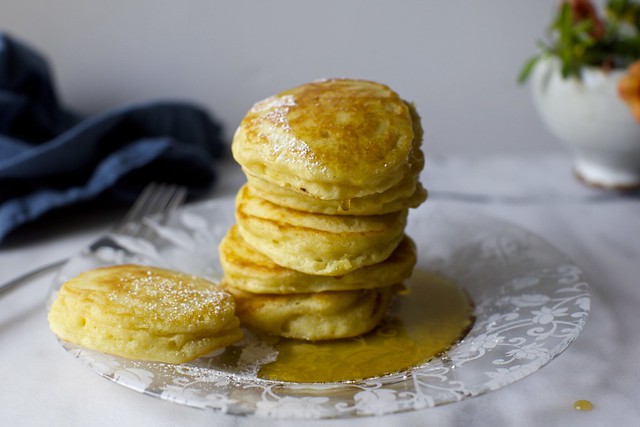 And so we made the buttermilk pancakes griddle cakes and guess what? They were tall and fluffy and stayed that way indefinitely; they were good an hour later from a warm oven, the leftovers were good microwaved on a school morning, and they were good cold schmeared with a little jam. They’re thick enough that you could add blueberries or other chunks of fruit or chocolate chips to them and they won’t fall to mush. There’s no cornstarch in there, no vinegar, only a moderate amount of butter and, here’s the best part, no separated eggs. Nobody should ever have to separate eggs before 9 a.m. on a weekend. 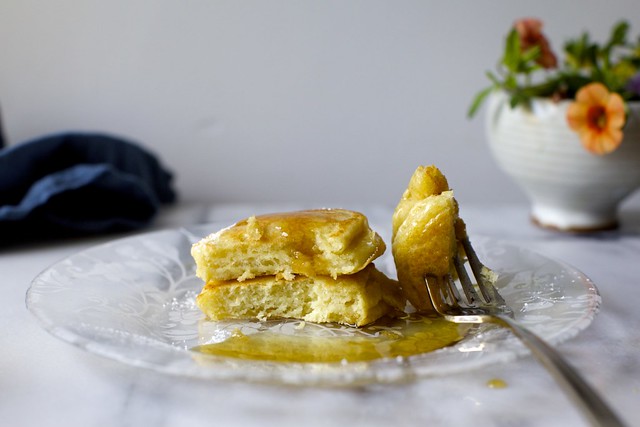 If you’ve thus far been enamored, understandably, with oatmeal or strawberry-cornmeal or lemon-ricotta or old-school cottage cheese pancakes, I do not expect these to replace them in your life. But if you’re looking for a classic, tall, fluffy, no-nonsense, one-bowl weekend pancake, do know that these are so simple, you can make them half-asleep; I know because I usually do. 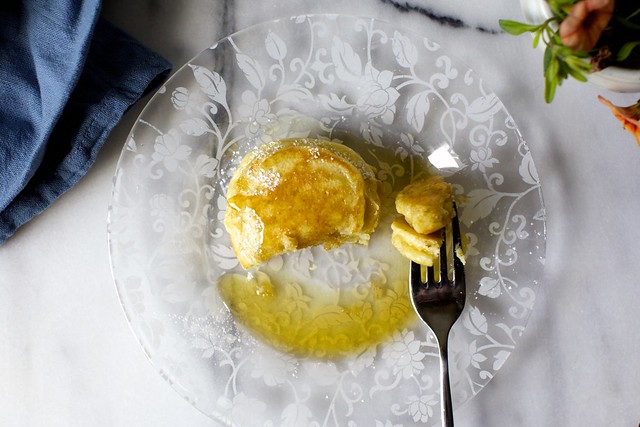 * especially tangents like this sidebar about “serious food people” and their gushing over how creative cooking is:

[This] also misses the whole point of cooking, which is that is totally mindless. What I love about cooking is that after a hard day, there is something comforting about the fact that if you melt butter and add flour and then hot stock, it will get thick! It’s a sure thing! It’s a sure thing in a world where nothing is sure.

And for the other side of the world:
Six Months Ago: Apple Strudel and Root Vegetable Gratin
1.5 Years Ago: Chocolate Peanut and Pretzel Brittle and Kale and Caramelized Onion Stuffing
2.5 Years Ago: Squash Toasts with Ricotta and Cider Vinegar and Smoked Whitefish Dip with Horseradish
3.5 Years Ago: Spinach and Egg Pizzettes and Perfect Uncluttered Chicken Stock
4.5 Years Ago: Roasted Pear and Chocolate Chunk Scones and Apple Cider Caramels

This recipe makes 14 quite-tiny (2 to 3-inch) pancakes. You should absolutely double it; I’m only not doing it preemptively because this amount works well for us (we adults usually try to eat more fruit than pancakes, heh). I find small pancakes easier to flip and the portions seem more fitting for small kids who still want a “stack.” I usually make this with buttermilk but if you only have yogurt, for a thick, plain one, use 1/2 cup and thin it with 3 tablespoons of milk.

Because buttermilk varies a lot in thickness, I give a range here for the correct amount. The one I use is very thick and I almost always need the full amount. Look for a batter thick enough that you have to push it off the spoon with your finger, or that doesn’t puddle out much when it hits the pan.

Heat oven to 225 degrees F and place a large baking sheet inside.

Melt butter halfway in the bottom of a large bowl then whisk in sugar. This should leave the mixture lukewarm, not piping hot, but if it still is, let it cool slightly before adding the egg. Whisk in egg and vanilla, then 1/2 cup plus 2 tablespoons of the buttermilk. Whisk in salt and baking soda until fully combined, scrape down bowl, then stir in flour until it just disappears. You’re looking for a thick mixture, more like a very soft cookie dough than a pourable batter, but if it’s very stiff, add 1 to 2 more tablespoons of the remaining buttermilk and stir until combined.

Heat griddle or frying pan over medium. Once hot, add a good pat of butter (please don’t skimp; butter makes crispy edges) and dollop in small mounds of pancake batter — I find a #40 or 1.5 tablespoon scoop to make this even easier and neater. Try to resist the urge to press the mounds into flat puddles; a little nudge is okay but we’d much rather keep the height here. Once bubbles form on top, lift a corner of each pancake and check for it to be lightly browned before flipping it.

At this point, I like to reduce the heat to medium-low for the remainder of the cooking time. I’d rather the pancakes take a minute longer than singe dark as soon as they hit the pan, but your stove will vary.

Once pancakes are golden brown on the second side, and do not worry if the tall sides look raw, this is completely expected, just transfer them to heated oven. Repeat with remaining batter. Tall, thick pancakes like this almost always hide pockets of uncooked batter; 5 minutes in the oven will fix this. You can leave them in the oven for much longer, however, if you now wish to rinse berries and make coffee (which of course you do).