Here is a dish that resides in two of my favorite places to eat: in the land of side dishes and luxurious party snacks. I have nothing against stuffed mushrooms — I’ll always eat them — but anything that involves an often complex sauté of ingredients scooped tinily and mounded carefully into mushroom caps (that frequently get dry or leathery in the oven, I know you’re nodding in agreement right now) that need to be served warm is not exactly going to fall in the unfussy category. This recipe rejects the scoops, the caps, and even the fine chop of stems and homes in instead on the flavors that make stuffed mushrooms awesome, baked messily in a pan for scooping onto plates or toasts. 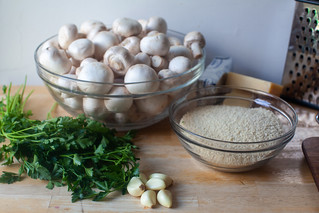 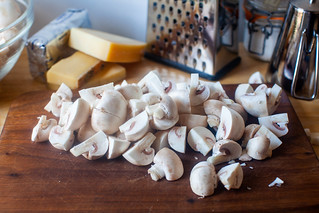 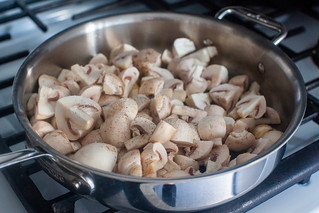 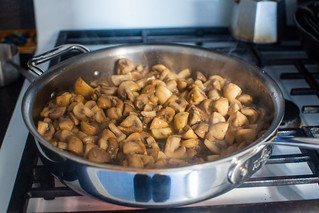 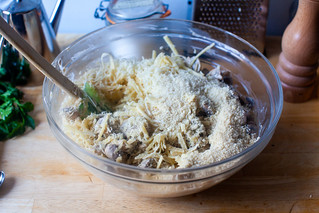 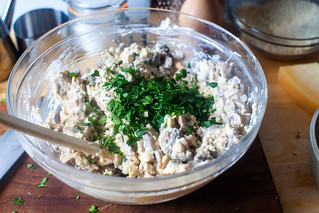 My friend Ang brought it to my place two Friendsgivings ago and I took the dish over this year because there would have been a riot without it. I’ve probably sent no fewer than 200 of you the link to the original recipe on the Food Network site but after making it this year, I realized there were some details that missing that help keep it from becoming chewy or overcooked, which brings it here today. The recipe as written is very simple — just cheese, garlic, parsley, and an abundance of crunch from breadcrumbs — but should you prefer your stuffed mushrooms with anything else [sausage, bacon, spinach, etc.] you could add that right to the mixture in the pan. Serve it right from the oven as a show-stealing side or at a party, scooped onto crackers or toast and vow with me to bring cozy cooking back in 2020. 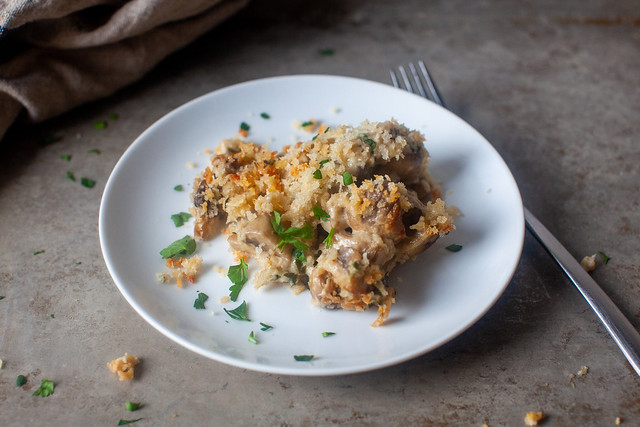 This is doubled from the original recipe and exactly as you see it here (filling a 2-quart baking dish) because the original makes way too little to share. You know that joke about spinach? It turns out white mushrooms reduce about 1/3 of their original volumes after cooking; don’t be disappointed.
Heat your oven oven to 350°F.

In a large frying pan (12-inch is ideal here) over medium-high heat, heat half (3 tablespoons) of the olive oil. Once it’s very hot, add half (1.5 pounds, but seriously, just eyeball this) of your mushrooms but don’t move them yet. Give them 1 to 2 minutes to brown underneath before adding 1/2 teaspoon kosher salt, a few grinds of black pepper, and half the garlic, then moving them around, trying to get them to brown on more sides until they begin releasing their liquid. Some have a little, some have a lot; in both cases you can to cook the mushrooms, stirring, until the liquid mostly, but not fully, cooks off — a thin puddle should remain. Scrape these mushrooms into a large bowl and repeat the process with the remaining olive oil, mushrooms, and garlic, plus more salt and pepper.

Once the second half of the mushrooms have mostly cooked off their liquid, add everything in the pan to the first half of mushrooms in the bowl. Add diced cream cheese and stir just until combined (the remaining liquid from the mushrooms should help it get saucy), then half of the panko (1 cup), all of the gruyere, half of the parmesan (1/2 cup), and most of the parsley (reserve some for garnish) and stir to combine. Transfer to a 2-quart baking dish.

Combine the butter and remaining panko (1 cup) and parmesan (1/2 cup) in a bowl with a couple pinches of salt. Sprinkle over top of the mushrooms and bake until the breadcrumbs are light golden brown, 25 to 30 minutes. Sprinkle with remaining parsley and eat right away.

To make this ahead of time, please read: Since I’m usually making this to entertain and like to get things out of the way, I pause the recipe (in the fridge until needed, covered with foil) where you transfer the mixture to a baking dish. To finish cooking, I first get the mushroom mixture warm without the crumbs, leaving the foil on, about 10 minutes, and then bake it the rest of the way with the crumbs on, until they’re a light golden brown, usually another 25 minutes. If you put the crumbs on sooner, they get too dark. If you finish baking the dish with crumbs and later rewarm it, the mushrooms get a little overcooked and the crumbs too toasty.