asparagus and egg salad with walnuts and mint

I found my new favorite spring lunch salad while I was hiding from a pot of brisket, which is the kind of thing that happens three days after Passover. Day one (which is actually day two or three after you’ve cooked the brisket, because you know I’d never lead you astray, right?) is lovely: my goodness, why don’t we eat long-cooked, saucy slabs of beef more often? Day two isn’t so bad either, albeit a touch less enthusiastic: yay, brisket. Day three is: my god this isn’t natural, nobody should eat this much brisket, what am I going to do? I cannot waste food. It’s too long into the brisket’s lifespan to freeze it now. And my thoughts turned to the vibrant green asparagus stalks we’d had with it, and that brisket was instantly relegated to a side dish. 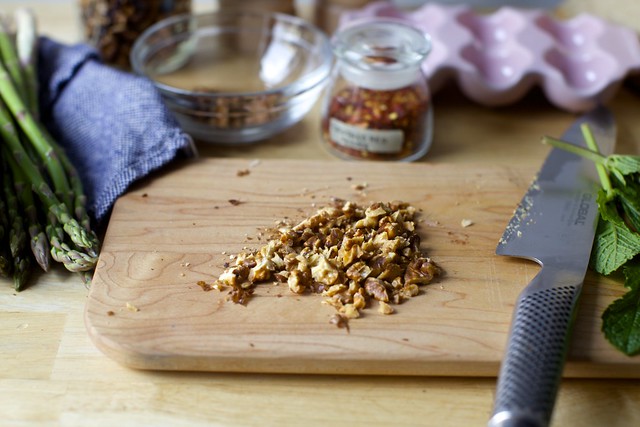 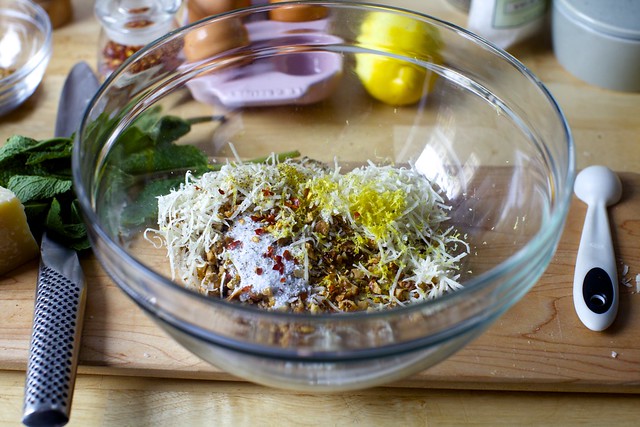 I wasn’t even a little bit surprised that I found inspiration for asparagus in the Six Seasons cookbook. Have you bought it yet? I know this is awfully bossy of me, but I think you should. I think that if you, like me, delight in inventive but not overly complicated vegetable preparations (225 of them, even), things you hadn’t thought of but that you’ll immediately tuck into your repertoire, you’re going to love this book as much as I do. I confess I’ve had it for almost a year. In that year, I’ve been almost overwhelmed with how much I’ve wanted to cook from it — a favorite so far has been the comfortable cabbage and farro soup with parmesan and lemon — almost to the point of paralysis, which is as ridiculous of a first-world problem as having too much brisket to eat, but here we are and at least one impasse helped resolve another. 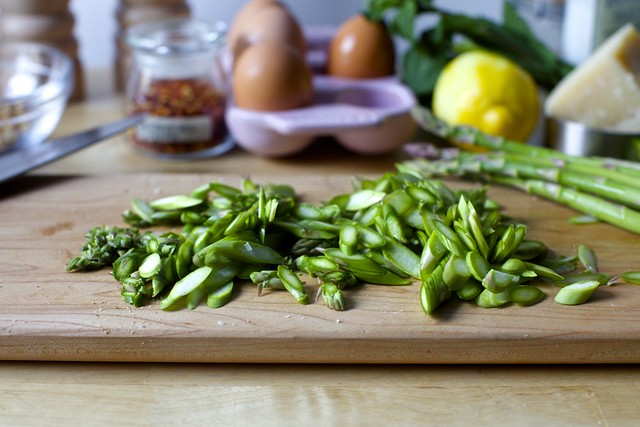 So let’s talk about this dish: It’s been so long since we did an asparagus salad, and only one has been raw, a shame because thinly sliced asparagus is almost sweet and not dry or woodsy at all. Previously, I’ve just ribboned it with a peeler. This is easier, more satisfyingly crisp, and less fragile too. The original recipe uses breadcrumbs to enhance the crunch; I skipped them because I pictured this on toast or crackers but missed them so little, I don’t think I’d add them back in even if eating it straight from a bowl, as I am this minute. 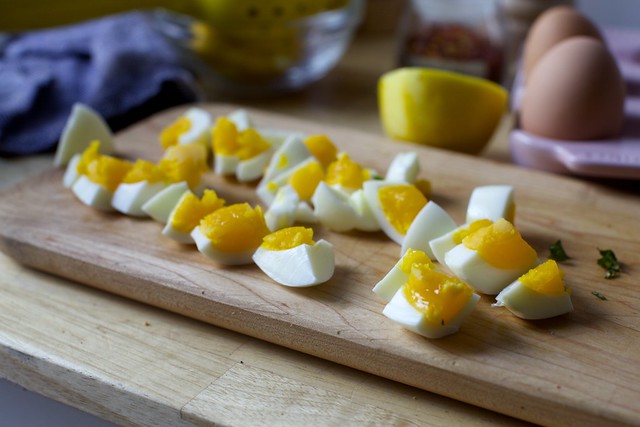 I added the eggs. I call these medium-cooked eggs; feel free to use fully hard-boiled ones if that’s what you’ve gotten idling in your fridge, but I find these more interesting. They’re not runny, but they’re not fully set or opaque in the center either. They amount tender oases in a crunchy salad; all of the flavorful bits stick to them (vs. fully hard-boiled eggs, whose insides crumble and stick to everything else).

I was suspicious of the lemon zest and mint and they’re my two favorite parts. Don’t skip them at all. 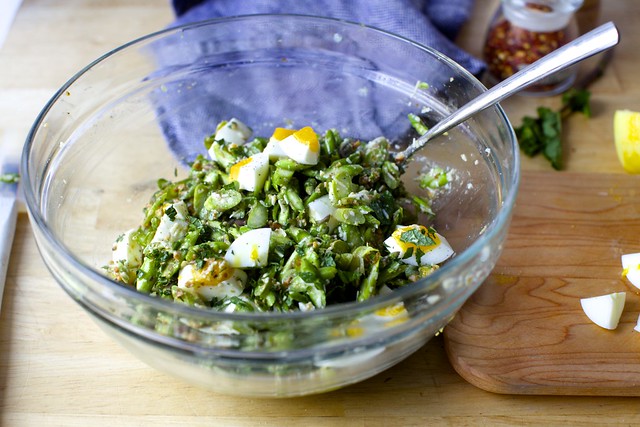 Finally, as might already be clear, I didn’t wait until asparagus season in New York to try this, as McFadden would have wanted us to. I have given up, just given up. It snowed in April, and might again before the week is out. When the asparagus shows up at the market, I’ll make it again and realize everything this salad is missing, but right now, when the grocery store is the greenest place I know, I couldn’t imagine another more perfect use of what’s there. 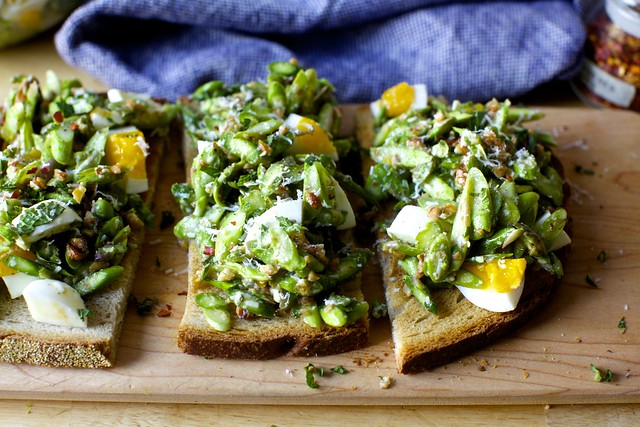 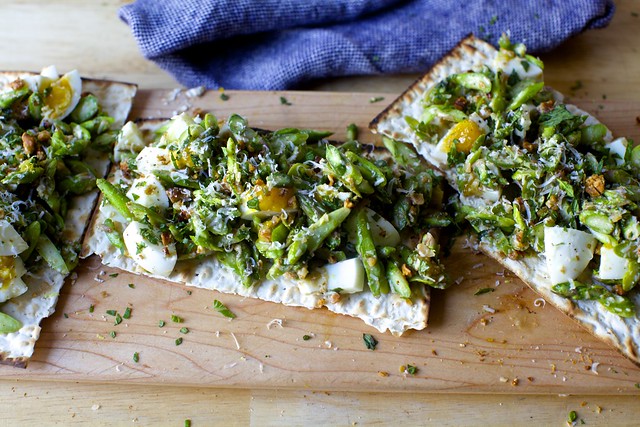 And for the other side of the world:
Six Months Ago: Chocolate Tahini Challah Buns and Quick Pasta and Chickpeas
1.5 Years Ago: Piri Piri Chicken, Chocolate Pavlova, and Homemade Merguez with Herby Yogurt
2.5 Years Ago: Zucchini Rice and Cheese Gratin, Oat and Wheat Sandwich Bread, and The Perfect Manhattan
3.5 Years Ago: Chocolate and Toasted Hazelnut Milk, Herbed Tomato and Roasted Garlic Tart, and Cauliflower Slaw
4.5 Years Ago: Butterscotch vs. Caramel and Butterscotch Pudding Popsicles

Asparagus and Egg Salad with Walnuts and Mint

Is this a good place to admit that I’m not an asparagus-snapper? This idea that the asparagus knows exactly where to snap to separate the tender parts from the woody ends defies what I’ve experienced, which is that asparagus will snap halfway between your hands, no matter where you place them. [The Asapargus-Snapping Truthers are going to come for me in the comments; I hope they are kind.] I like McFadden’s suggestion more: choose one stalk from the bunch and snap or trim it to the right spot, then line up the remaining stalks and cut them to the same point.

I believe in toasting nuts any time you’re going to use them, and especially here. I am not crazy about grating parmesan with a microplane zester; I find it yields fluffy clouds that can disappear in food and are often half the amount of cheese you’ll need for good flavoring. I have all the unpopular opinions today, I know.

You can peel your eggs under running water if needed but I find when I begin with cold eggs and plunge them into cold water as soon as I want them to stop cooking, the shells come off very easily and was delighted to see this backed up by science

Bring a small/medium pot of water to boil. Gently lower in eggs and reduce heat to a simmer. Boil for 8 1/2 minutes, then quickly transfer eggs to an ice-cold water bath. Leave them there while you prepare the other ingredients, but ideally at least 10 minutes.

Place parmesan, walnuts, and lemon zest in the bottom of a large bowl, along with 1 teaspoon salt, many grind of black pepper, and about 1/2 teaspoon chile flakes (or more or less to taste; I used half because: kids). Stir to combine.

Cut the asparagus on a sharp angle into very thin slices and add to the parmesan mixture. Add 1/4 cup lemon juice and toss some more. Taste and adjust the flavors to your preference by adding more salt, black pepper, chile flakes, or lemon juice, and go a little bit heavy, so the flavors don’t disappear once you add the eggs. Add mint and olive oil toss, adjusting seasoning again.

Peel your cooled eggs. Cut in half, then each half into 6 to 8 chunks. Add to bowl with asparagus and give it one or two gentle stirs (I don’t want to get them too mashed up here).

Eat as is, or scoop onto 6 to 8 toasts or 3 large matzo sheets, halved into 6 more manageable “toasts” (obviously this would negate the gluten-free categorization).