I blame Katz’s for this. Two months ago, when we spent a day out playing tourist — i.e. breakfast bagels, Madeleine at the New York Historical Society followed by The Dinosaur Museum of Natural History (what my son calls it, please never correct him) — we decided to finish off our shivering afternoon with a visit to Katz’s Deli, a place I hadn’t been to in probably 10 years despite living fewer than 15 blocks from it, and the kid, never, shame on us. Alex ordered the chicken noodle soup and this hot mess arrived and it was peculiarly perfect: overloaded with noodles, colossal chunks of carrot and chicken and I… was jealous. My homemade chicken noodle soup never looked like this. 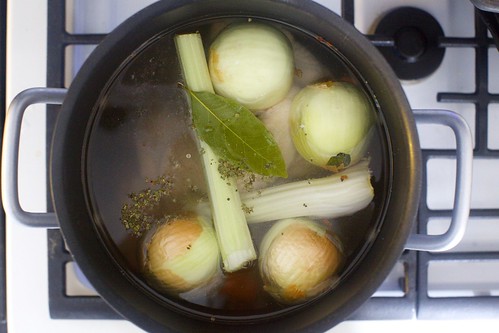 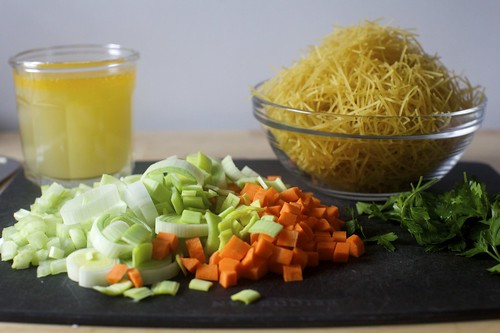 Now, it’s not like we haven’t made chicken soup here before. I shared last year my favorite uncluttered chicken stock, which is technically just some extra parts away from a completed bowl of soup. I’ve got a quickie recipe for from-scratch chicken noodle soup in the archives, too. But what I didn’t have was what was in front of me, the kind of soup that might take the better part of an afternoon to make but rewards you with a depth of flavor that makes everything bad — threatened head colds, shivering wind outside, pangs of social media envy over apparently everyone being on a tropical vacation but us and also this taunting me every time I walk by it — at least temporarily disappear. Everyone needs a winter miracle recipe like this in their back pocket. 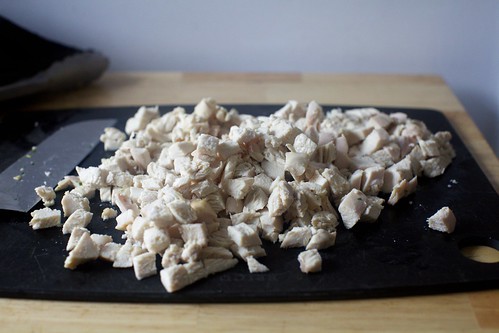 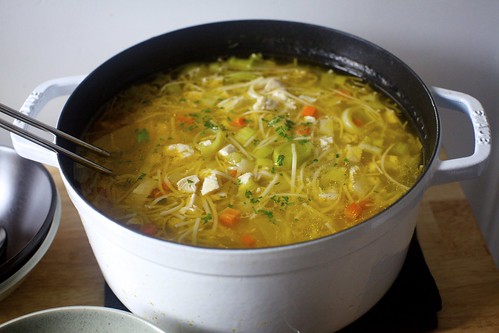 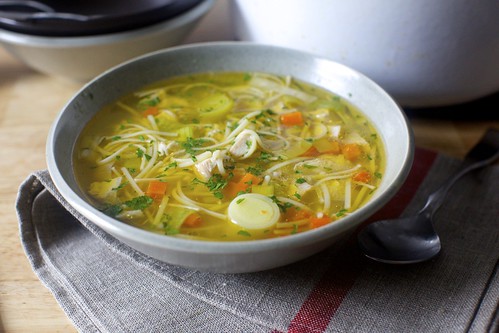 So, that Monday, a brutal 32 degrees outside, I began my chicken soup studies: what did the great recipes include that I didn’t? I found a few curious leads: a spoonful of tomato paste in a version of Cook’s Illustrated, some dried thyme in an old one from Gourmet, plus a few of my favorites: parsnips (my mother in law’s go-to addition) and leeks (which a friend’s houseguest had included in a recent chicken soup, to my delight). I used them all. And what came off the stove at dinnertime was unquestionably one of the best things I’ve ever made. I know I cook a lot, I know I gush a lot here about recipes, but it still isn’t even on a weekly or monthly basis that that the gap between what I’d hope to cook and what I ended up making is absolutely nonexistent, that a little bowl of anything manages to embody all of our chicken noodle soup hopes and dreams. But this one did. 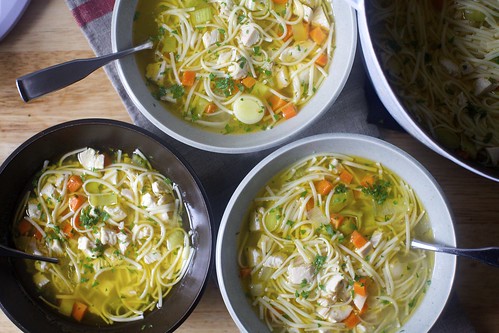 A tour de soup: [All the Smitten Kitchen soups, on Pinterest]

And for the other side of the world:
Six Months Ago: Blue and Red Berry Ricotta Galette
1.5 Years Ago: Peach and Pecan Sandy Crumble
2.5 Years Ago: Flag Cake
3.5 Years Ago: Skirt Steak with Bloody Mary Tomato Salad (on a lawn chair)

You’ll want about 4 to 4 1/2 hours to make this in one afternoon. Or, you can break it up over two days or cooking periods by making the broth either on the stove in 2 to 3 hours or in a slow-cooker for longer (such as while you’re at work), at which point you’ll need just an hour to finish the soup, making it weeknight accessible.

If you’re a total heathen, as we sometimes are, you can use up to 12 ounces soup noodles here for recipe that will be almost more noodle than soup. But I recommend at least starting with the 9-ounce level before determining if overkill will be necessary.

[On the stove] Combine all ingredients in a large (6 to 8 quart) stock pot over high heat and bring to a boil. Once boiling, reduce to a gentle simmer and cover with a lid. Simmer for 2 1/2 hours. [In a slow-cooker] Combine all ingredients in a large (6 quart or larger) slow-cooker. Cook on LOW for 10 hours or HIGH for 5. Strain into a large pot (5.5 quarts or more) and let rest in the fridge until needed, or, if you’re finishing the soup right away, bring to a simmer on the stove.

[Both methods] Add whole chicken breasts to simmering broth. Simmer for 20 minutes, until they’re cooked through, then strain broth [for stovetop method] or simply remove cooked chicken breasts [from the slow-cooker method] and set them aside. Taste broth, and adjust seasoning if needed.

Add diced vegetables to simmering broth on stove and cook for 5 minutes, until firm-tender. Add soup noodles and cook according to package instructions, usually 6 to 10 minutes. Meanwhile, once chicken breasts are cool enough to handle, remove skin and bones and shred or chop into small chunks. Return chicken to soup and simmer for 2 minutes, until heated through. Finish with parsley and serve to some very lucky people.