One of the terrible things that well-intentioned food people do all of the time is get bored with things that everyone loves. Because there’s a there’s a near-constant stream of food media coming in, with time the “hot takes” on apple pie begin to feel monotonous, the “cool new thing to do with sweet potatoes” can cause inward groans and pumpkin/pumpkin-spiced things? I’ll let them tell you: “Pumpkin spice has ruined pumpkins,” says Alton Brown. “America has gone entirely too far in its pumpkin spice devotion,” says Eater, with a fair amount of evidence backing it up. The Washington Post likened pumpkin spice lattes to “liquefied fall-scented potpourri.” 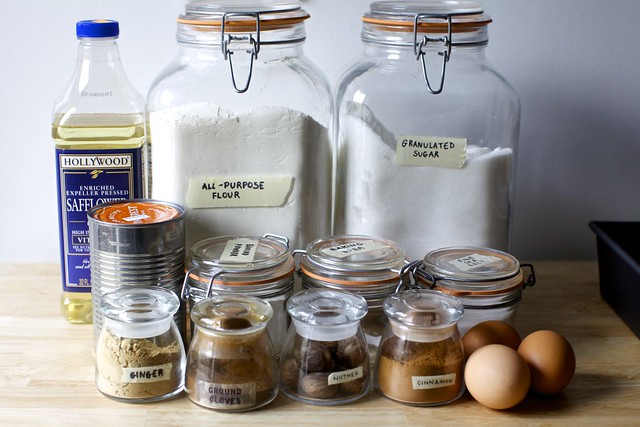 I, too, fell into this trap, something I hadn’t realized until I Snapchatted* making pumpkin bread a few weeks ago and have never received so many recipe requests. I didn’t get it at first — I mean, pumpkin bread is the most basic thing, right? And Google claims 5.7 million ways to make it. What could I possible add to the conversation? 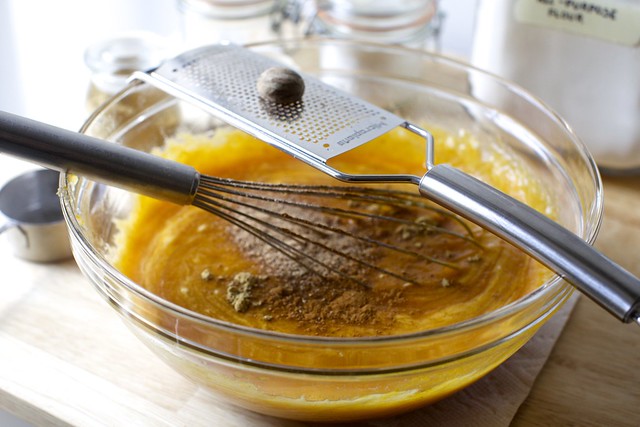 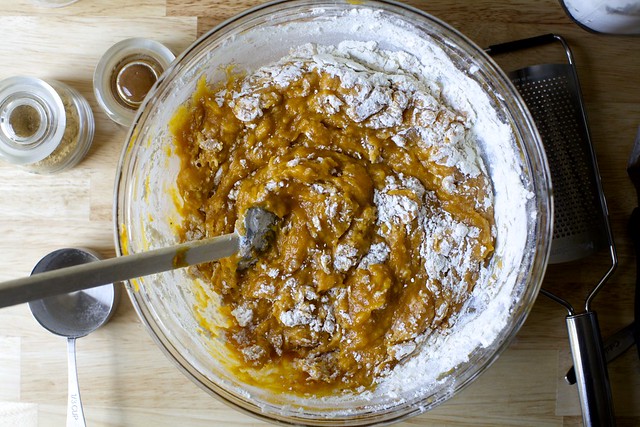 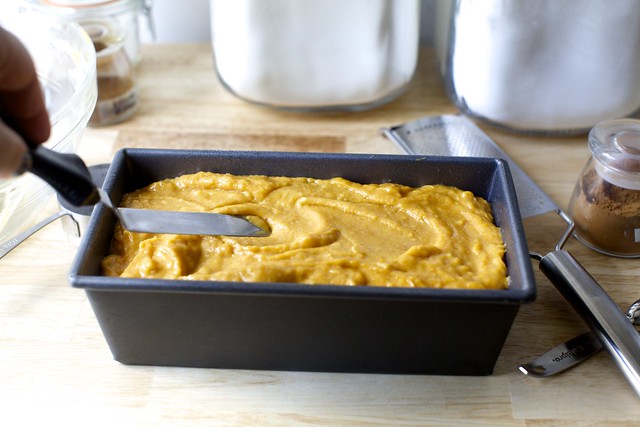 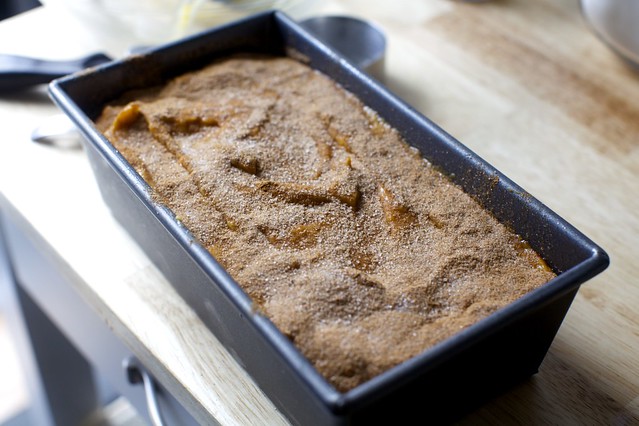 But as I was making it, I got very persnickety about it, bothered by a few things in the recipes I tried. First, none of them really filled out my loaf pan and I wondered why we were settling for less when we always wanted more. Second, I adore brown sugar in most things, but it makes for a rather brownish cake and the versions I made with only white sugar tasted no less awesome. Third, good pumpkin bread is always tender and plush inside, but why can’t it have a crispy lid too, the way my favorite pumpkin muffins do? Finally, small cans of pumpkin have 1 3/4 cups of puree in them. Most recipes use 1 cup pumpkin and I like to go all the way to 1 1/3 cups. That small amount leftover drives me batty. So, I scaled my recipe a little, and then a little more and until I ended up with an insanely towering pumpkin loaf with a crispy crackly impossible-not-to-pick off cinnamon-sugar lid that’s like a snickerdoodle landed on top of a pumpkin bread and if there was ever a time to shake off any pumpkin/pumpkin-spice skepticism, you are in the right place. You’re among friends. Next stop: hayrides, corn mazes, apple picking, flannel shirts, hot apple cider and Don’t say it, Deb! … decorative gourds. 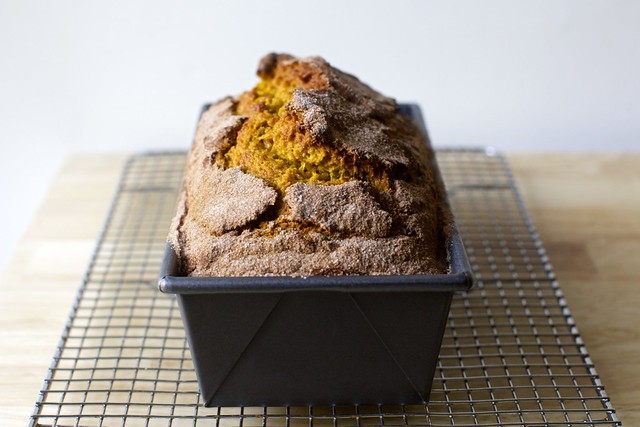 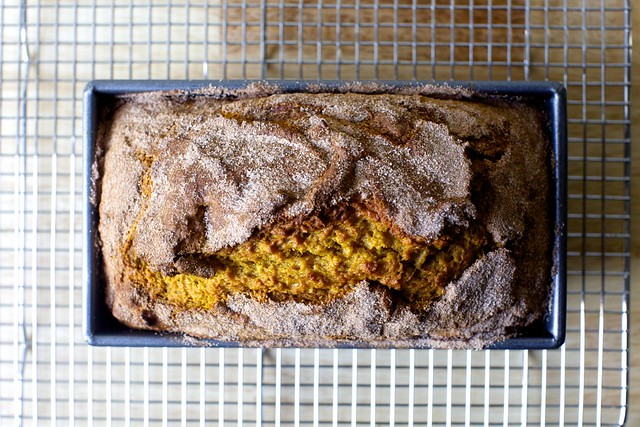 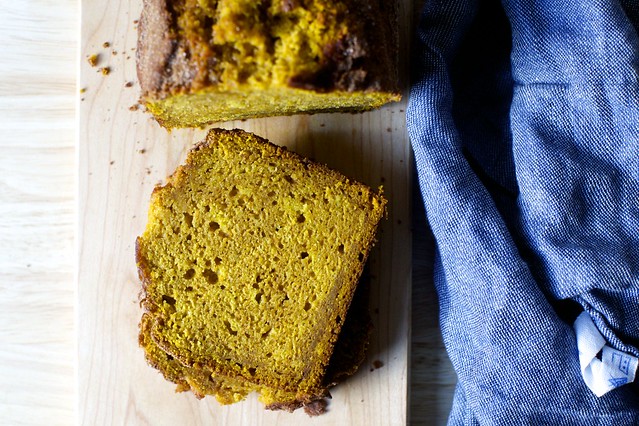 * @smittenkitchen, are you following? I hope you do. I’m having so much fun embarrassing myself over there. Also I share meal so-called plans, you know, real ones that include days like last Tuesday with the menu item “nope!”

Toronto! I’ll be in Toronto a week from Saturday, 10/22 at Type Books at 7:30 p.m. in conversation with Toronto Star Food Editor Karon Lui. [Details] I’m actually going to be in town all weekend for the Canadian Food Bloggers Conference, which has kindly invited me to keynote, something I’m not terrified about at all, nope.

And for the other side of the world:
Six Months Ago: Carrot Tahini Muffins
1.5 Years Ago: Strawberry Rhubarb Soda Syrup
2.5 Years Ago: Dark Chocolate Coconut Macaroons
3.5 Years Ago: Bee Sting Cake
4.5 Years Ago: Banana Bread Crepe Cake with Butterscotch

This is a towering, craggy pumpkin bread with a crisp cinnamon sugar lid that is impossible not to pick off in deeply satisfying bark-like flecks. Trust me, someone in my family notnamingnames did exactly that this morning, and I almost cannot blame them.

Very key here is the size of your loaf pan because this will fill out every speck of it before it is done. Mine holds 6 liquid cups; it’s 8×4 inches on the bottom and 9×5 inches on the top. If yours is even slightly smaller or you’re nervous, go ahead and scoop out a little to make a muffin or two. You won’t regret that either. This also uses an excess of cinnamon sugar on top — it’s always too much and I cannot stop because I love the way it spills off when I slice it and then you can slide your slices through the extra. If this is going to bother you, however, go ahead and use half.

You can also make this as muffins. It should make about 18 standard ones and you can distribute the cinnamon sugar (perhaps make 1 1/2 tablespoons sugar and 1/2 teaspoons of cinnamon worth) across the tops before you bake them. They should bake for 25 to 30 minutes.

I’ve also made this with mashed sweet potatoes and other squashes with success (but if it’s more wet and thus the batter ends up more loose, be caaaaareful as it could throw this towering loaf into a spilling-over situation). And I’ve done it with half whole-wheat flour.

Finally, I know someone is going to say “that’s way too much sugar!” but please keep in mind this loaf is gigantic, easily 1.5x a normal one and the sugar is scaled accordingly. You can decrease it if you wish but we have made this now several times and many people have commented about how in-check the sugar level tastes, not over the top at all.

Heat oven to 350 degrees F. Butter a 6-cup loaf pan or coat it with nonstick spray.

In a large bowl, whisk together pumpkin, oil, eggs and sugar until smooth. Sprinkle baking powder, baking soda, salt, cinanmon, nutmeg, ginger and cloves over batter and whisk until well-combined. Add flour and stir with a spoon, just until mixed. Scrape into prepared pan and smooth the top. In a small dish, or empty measuring cup, stir sugar and cinnamon together. Sprinkle over top of batter.

Bake bread for 65 to 75 minutes until a tester poked into all parts of cake (both the top and center will want to hide pockets of uncooked batter) come out batter-free, turning the cake once during the baking time for even coloring.

You can cool it in the pan for 10 minutes and then remove it, or cool it completely in there. The latter provides the advantage of letting more of the loose cinnamon sugar on top adhere before being knocked off.

Cake keeps at room temperature as long as you can hide it. I like to keep mine in the tin with a piece of foil or plastic just over the cut end and the top exposed to best keep the lid crisp as long as possible.