sausage and potato roast with arugula

I realize that if you want to toss some sausages and vegetables on a sheet pan on a weekday night and roast them to crispy, self-seasoned blister, there are innumerable ways to do it. I’ve fiddled around with this broccoli and chunks of sausage; I’d intended to try a version with cherry tomatoes and garlicky croutons before my tomatoes went south. You may not need a recipe. 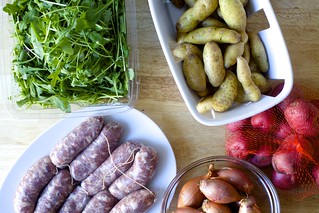 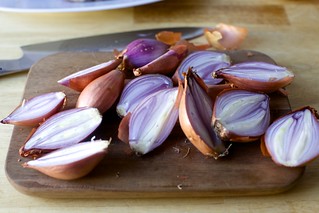 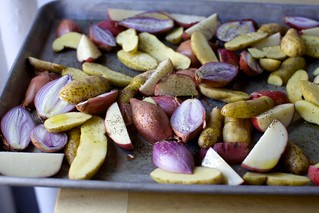 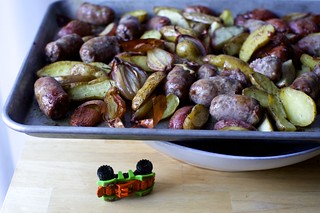 But for me, so much of weeknight cooking is a random suggestion that pops into my feed that doesn’t have to be overtly revolutionary, just something I hadn’t considered before and immediately want to make before anything else. In a moment, I go from lethargically considering a bunch of options I’d rejected on previous evenings for various reasons to mentally calculating how long it will be until dinner and wishing it was now now now. Finding these moments is my primary cooking interest. 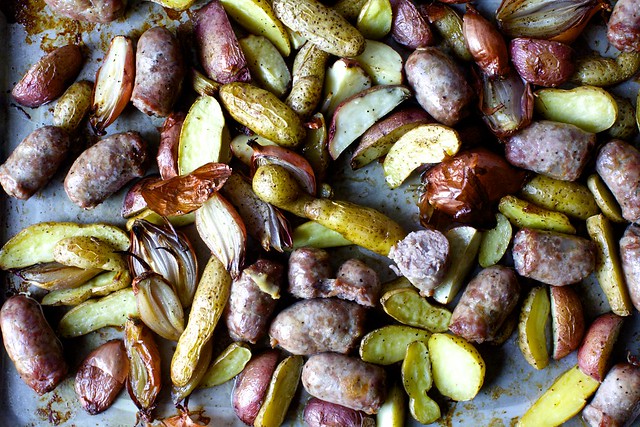 This is also how this sausage and potato roast came about. It’s from Justin Chapple at Food & Wine, the same person who brought us this spaghetti pie, cacio e pepe style, i.e. he’s crazy clever. What called to me about this version were two things: the abundance of shallots that roast until they’re dark and sweet, and the abundance of arugula, meaning that this dish is protein, starch and salad at once, or the dinnertime equivalent of the praise-hands emoji. I also love that you finish it with lemon juice; a burst of acidity goes far to balance all of the flavors. It feels like a meat-and-potato main crossed with a fall salad. (I’ve already told my mother she should make it for dinner tonight, if you needed a bigger endorsement.) 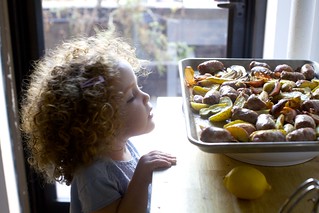 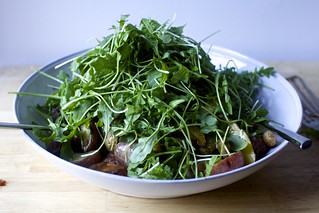 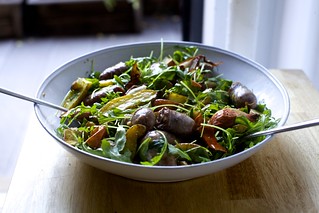 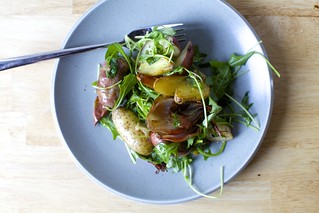 One week from today: When I talked about being obsessed with the kinds of recipes that made you want to cook right this moment, I was also talking about this: my second cookbook that comes out a week from today on 10/24. A book tour begins that evening right here in NYC. Boston, Toronto and Chicago follow before Halloween (when I’ll be home, stealing candy from my kids while they sleep, as per tradition) and Philadelphia and Washington DC right after. Almost two dozen cities in total, I hope this means we get to meet. [Tour Details]

But also some Black Bean Soup: I updated one of my favorite vegetarian (vegan without the crema finish) soups in the archives last week with (drumroll) InstantPot directions (in addition to the existing stovetop and slow-cooker ones). It doesn’t matter how you make it, only that you do.

Sausage and Potato Roast with Arugula

I ended up tweaking a few of the amounts — I needed weights for potatoes because I’m exacting and found a 5-ounce clamshell of washed baby arugula to be more than enough for the dish. And I needed more cooking time. Yours, too, will probably vary a little depending on the thickness and of your sausages and potato cuts. I can get shallots easily but I do think if they’re a pain for you to get that red onion wedges (I’d cut up 2 to 3 large ones) would work too.
Heat oven to 425°. On a large rimmed baking sheet, toss all of the potatoes and shallots with 3 tablespoons olive oil, salt (I use 1 teaspoon kosher), and a lot freshly ground black pepper or red pepper flakes to taste. Roast for 15 minutes, at which they’ll be barely beginning to color. Give them a toss and add sausages. Brush the tops with a little olive oil and return the tray to the oven for another 30 to 40 minutes, until the potatoes are tender and the sausage is cooked through.

To finish: Transfer everything on the tray to a big bowl and add arugula, lemon juice, and more salt and pepper to taste. Serve right away.