Please tell me this doesn’t just happen to me: You know when you love a dish so much, you don’t even want to risk ordering it when you’re out because it’s so often disappointing? Hopeless child of the 80s and 90s that I am, tiramisu is a top five dessert for me but I almost never eat it for this messy reason. At its finest, little bits of cake are almost saturated with bracing espresso then burrowed in a cream that’s ethereally light and fluffy for containing an unholy amount of mascarpone and dusted generously with cocoa or shaved unsweetened chocolate between each layer. The sum of the parts isn’t overly sweet but quite rich, ideal in small doses. It is heaven. 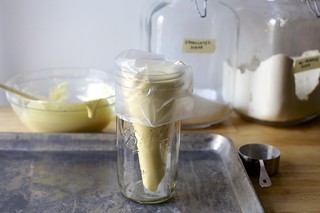 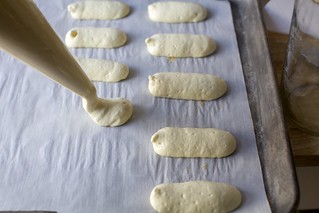 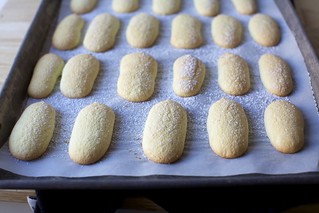 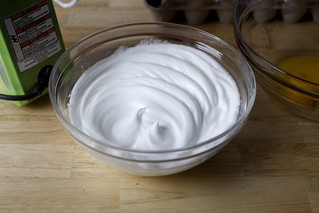 The obvious solution would be to make it at home, and pre-kids and pre-this-site, we did this often. Pretty much any dinner party we had was an excuse to fine-tune my recipe and if you told me there was some not-so-distant future when I would realize it had been almost a decade since I last made it, I would have thought you’d gone off the deep end. But here we are and the reality is that good tiramisu, the only kind I want to bother with, contains the following not exactly child-friendly or child-incubation-friendly things: 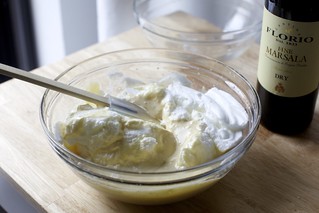 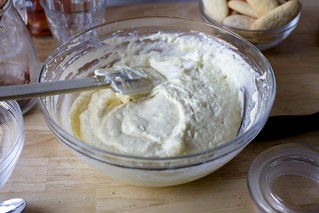 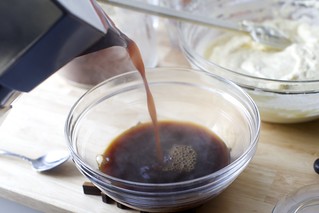 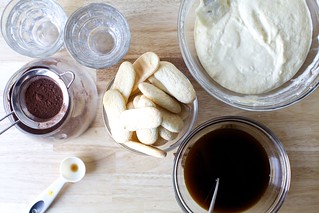 … Which has severely cramped my tiramisu intake over the last 8 or so years. It’s funny, I am completely okay with making something for dinner my husband and I want to eat that the kids might hate (it helps to wear earplugs to drown out the complaints) (just kidding!) (kinda) but a big pan of a chocolate-dusted dessert that the kids can’t touch? Even by my standards, that’s excessively cruel. [“Yay! You made chocolate pudding with cake in it!” “Not for you, dear.”] 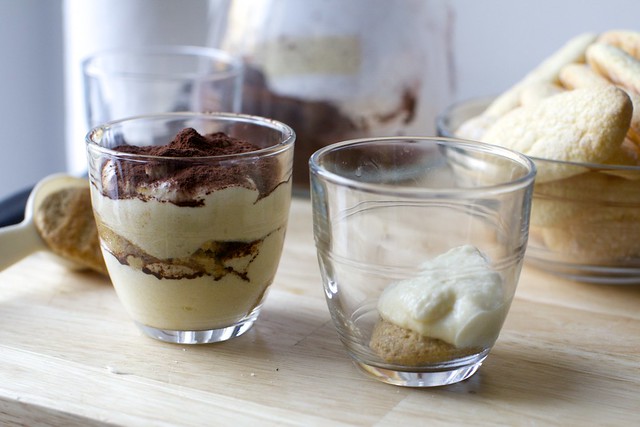 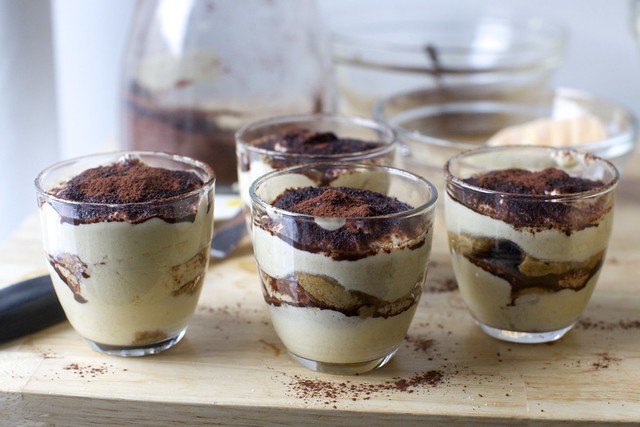 But I finally found my solution: small-batch tiramisu, that is, utterly perfect, completely uncompromised tiramisu made and served in small enough cups for an occasional luxury but not so much that two adults end up eating a casserole dish of triple cream. Furthermore, they’re so tiny and funfetti-free, the little people might not even notice that you’re not sharing. 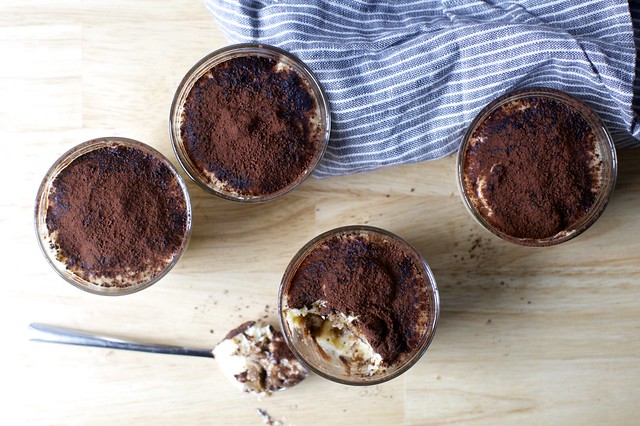 And for the other side of the world:
Six Months Ago: Chile-Lime Melon Salad and Chocolate Peanut Butter Icebox Cake
1.5 Years Ago: Rapsberry Crushed Ice
2.5 Years Ago: Blueberry Crumb Cake and Cold Noodles with Miso Lime and Ginger
3.5 Years Ago: Strawberry Lime and Black Pepper Popsicles and Kale Salad with Pecorino and Walnuts
4.5 Years Ago: Charred Pepper Steak Sauce and My Favorite Brownies

I use these cups for the small portions and these for large (not shown in these pictures). Remaining recipe notes at end.
In a medium bowl, beat egg whites until stiff.

In a larger bowl, using same beaters, beat egg yolks and 1/3 cup sugar until thick and pale yellow, 3 to 4 minutes. Beat in mascarpone cheese until combined, and continue beating another minute for extra fluff. Beat in marsala until smooth. Gently fold in egg whites until combined, trying not to deflate the mixture. It will be a loose, soft, creamy custard.

In a small bowl wide enough to dip cookies into, combine the espresso and 1 tablespoon sugar. Set aside.

To assemble small cups: Dip first cookie in espresso mixture until almost fully saturated but not falling apart. Break in half and place the first half in the bottom of your cup. Spoon 1 generous (I use a measuring spoon, but heaped a little) tablespoon cream over it. Repeat with second half of first biscuit and another spoonful of cream. Dust with cocoa powder. Dip second cookie in coffee and break in half. Place side-by-side over cocoa then top with 2 generous tablespoons cream mixture, which should take you nearly to the top of the cup. Dust with more cocoa. Repeat with remaining cups.

To assemble large cups: Dip first cookie in espresso mixture until almost fully saturated but not falling apart. Break in half and place side-by-side in the bottom of your larger cup. Spoon 2 generous tablespoons (I use a measuring spoon, but heaped a little) cream over and dust with cocoa powder. Dip two biscuits in espresso mixture and break in half. Place 3 of the halves on top of the cocoa powder, cover with another 2 generous tablespoons of cream and cocoa powder. Dip a 4th biscuit in the espresso mixture, break it in half, and place these two halves plus the leftover half from the previous layer on top of the cocoa. Dollop more cream over and repeat with remaining cups.

If you can bear it, let cups chill in fridge overnight to set. Before eating, you can dust them with fresh cocoa powder for a prettier look.

You can flavor these with 1/4 teaspoon vanilla or 1/8 teaspoon almond extract and a little lemon or orange zest if you wish.
Heat oven to 400 degrees F and line a large baking sheet with parchment paper.

In a medium bowl, beat egg whites until stiff. Set aside.

In a large bowl, with the same beaters, beat egg yolks with 1/3 cup sugar until thick and pale. Gently fold in egg whites, then fold in flour, trying not to deflate the mixture.

Pour batter into quart-sized freezer bag and snip off end to about a 1-inch opening or a pastry bag with a large round tip. Pipe cookies into 3-ish inch strips, with a 2 inches between each cookie. Bake cookies until faintly gold and dry to the touch, about 6 to 8 minutes (although I found it to take up to 4 minutes more when using a lighter-colored cookie sheet; better to check early). Let cool on tray for a minute then transfer to a cooling rack to cool completely.

If you’re getting a lead on these cookies and won’t need them until the next day, leave them out uncovered so they can dry out as much as possible.

Notes:
First things first: You might have noticed I made my own savoiardi, not because I cannot get them around here and not because I think your tiramisu will suffer without them. Nope, quite simply, I realized they contained a few as three ingredients and had to see for myself if they were as simple as they sounded. Turns out, they totally are so I’m including the recipe I settled on (after a couple flops, let’s not talk about it) below.

Should you be purchasing ladyfingers, look for crisp ones. I understand that at some point, American-style ones were softer and Italian-style ones were more crisp. (I feel like I only see the latter these days, but should you end up with the former, dry them out in the oven for a bit until they have a snap to them. You want them to be able to absorb.

This recipe is tweaked from one of my favorite cookbooks to curl up with. I talked about it previously here and here. This version is halved, uses a bit less sugar. I used the rum in the coffee but would skip it next time; I think the marsala is sufficient for good flavor.

Marsala is the traditional alcohol in tiramisu. You can use sweet or dry. Sweet is more typical for desserts but I only keep dry around. After reading this from Cook’s Illustrated, I felt confident it would be just as good, and it was. My second choice for tiramisu is rum. I know brandy works fairly well too. I’m not crazy about Kahlua because the dessert itself is naturally flavored with chocolate and coffee, no need to add it artificially when you could just use rum. For both brandy and rum, I might use a touch less because marsala has a lower alcohol content.

As for tweaking this recipe to make it less risky, you could use pasteurized eggs, and at minimum, you should use eggs you’re as confident one can be are fresh. You could use decaf espresso. I am sure someone somewhere skips the booze or uses less. All work. You’re making this for you, not me. But if you’re making it for me, please don’t. And if you’re on the fence about making it this indulgently, do it once and if it’s terrible, you can send all the extras over here.